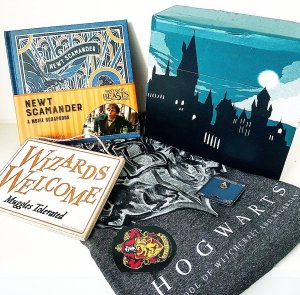 On this Tuesday evening that kinda feels like a Monday, I bring you this month’s edition of Lootcrate Unboxing. And look, it’s on time(ish)! I know that I’ve moaned over the last 2 posts about about the late arrivals of the boxes, and that last time I decided to cancel my subscription, so this week I am going to do nothing but praise this pretty good crate. This month’s theme is Enchanting Essentials, and unlike the past 2 crates, I did have a spy at the contents on Instagram to see if there was anything I could put on my wall as part of my gallery collection (spoiler: there was). There were lots of Lootcrate exclusives in this box, and lots of things I really liked! 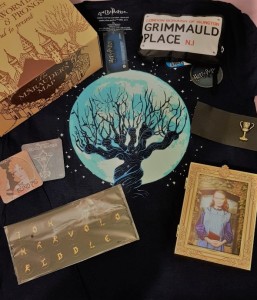 Look at what we have here, it’s another Lootcrate unboxing. This time, I did absolutely no spying on Twitter or Instagram, so I didn’t have a scooby doo what was going to arrive in my box. I think I like it that way, everything was a surprise. I am always excited when subscriptions are due, but the theme of this box was ‘Secrets of the Wizarding World’, so my tingly spidey senses were even more on edge that usual! This time, the box inside looked like the Marauder’s Map, so when it is folded inside out and rebuilt, the box has the really cool pattern and lettering that appears when the map is first revealed. Clever considering the theme really! 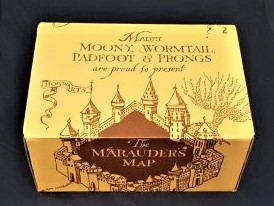 This is a little late, I can almost hear you saying! And you’re absolutely correct. It wasn’t my fault either. This box arrived as close to Christmas as it could have without missing it, on December 23rd. It was the November crate technically, but around the time it would usually be sent, the normal delivery information email never arrived. Instead, a few days later, there was a generic email stating that the November shipment had been delayed. Now, I wouldn’t usually mind, I completely understand that this is a product that is dependant on their suppliers, but it was the complete lack of information and the fact they said we would receive information on December 1oth relating to traffic, and nothing had arrived by December 17th. Pestering on Twitter was completely unsuccessful (although they did answer), so when I received the information and then the box a couple of days later, I was simultaneously relieved, and disappointed.

END_OF_DOCUMENT_TOKEN_TO_BE_REPLACED 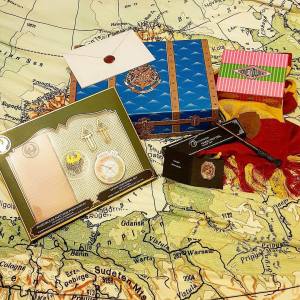 It’s that time again, where I sit anxiously waiting for the shipping information to yield an actual parcel on my doorstep. This time round, I wasn’t in the house when my box was delivered, so I had to escape to the local post office the following morning and pick the box up, before waiting A WHOLE DAY knowing it was in my car, ready to be opened. I know, what self control! This time, the box was much thinner, but larger in size, and I knew from spying others Instagram posts, that it would transform into a ‘Back to School’ style trunk! And this edition contains all Loot crate exclusives, which makes it even more magical.

Loot crate is a monthly subscription box full of exclusive collectibles, apparel and gear delivered to your door. I am currently subscribed to receive the Wizarding World crate, a bi-monthly subscription that brings the magic of Harry Potter, Fantastic Beasts right to your doorstep. Let’s check out this month’s box:
END_OF_DOCUMENT_TOKEN_TO_BE_REPLACED