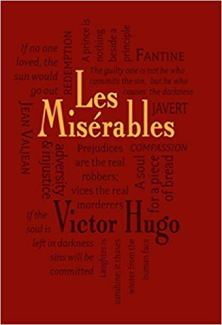 Victor Hugo’s tale of injustice, heroism and love follows the fortunes of Jean Valjean, an escaped convict determined to put his criminal past behind him. But his attempts to become a respected member of the community are constantly put under threat: by his own conscience, when, owing to a case of mistaken identity, another man is arrested in his place; and by the relentless investigations of the dogged policeman Javert. It is not simply for himself that Valjean must stay free, however, for he has sworn to protect the baby daughter of Fantine, driven to prostitution by poverty. A compelling and compassionate view of the victims of early nineteenth-century French society, Les Misérables is a novel on an epic scale, moving inexorably from the eve of the battle of Waterloo to the July Revolution of 1830.

For such a long book, and let’s be honest that Les Misérables is one hefty brick, this is a relatively short review. Throughout May 2019, I read and reviewed the book as I went as part of a readathon my friend Emma @ The Terror of Knowing were co-hosting. They’re completely ridiculous and lacking any actual commentary, and even if it was only me who thought it, they were quite humourous. So I thought it was high time that I actually wrote some semblance of an actual review. If you would like to read my previous ramblings about the book, you can read the posts here: Volume I, Volume II, Volume III, Volume IV, and Volume V.

I read this largely because of the readathon, and because I wanted a little more backstory that would fit with the musical adaptation. The problem is Les Misérables, as mentioned, is a long ass book. In part, I think it’s needed and relevant. There is an abundance of character development, plotting, and time that passes throughout the narrative and a lot of this feels interesting, relevant, and enjoyable to read. The problem is that it is interspersed with unnecessary information and forays into dissertation that the book doesn’t flow smoothly and the reader disengages for portions of the book. I don’t want to dwell too long on the negative aspects of this writing style, but I do really feel like editing could have been better. If information on sewers and sewage systems, unrequested back story amounting to 50+ pages each on barricades beyond the timeline of the narrative and Waterloo before the story started. If these parts were removed, along with shorter irrelevant fact pieces, the book itself would be shorter and less daunting and the story would flow better in a more engaging way.

What is done well is character development. We are introduced to Valjean early on and watch his progression from hardened criminal to society do-gooder to benevolent father. His battle with Javert is both comical and heartbreaking, their ongoing battle for justice is a theme that continues throughout the book and is one I loved in both print and musical form. Javert has some of the funnier moments in the story, and his one-liners about hats at dramatic moments actually made me laugh out loud. I would have been happy with a book about their relationship alone, but I was pleased to see it weave into the story about the barricade fighters, criminal underbelly, and inevitably required love story.

In the musical, I found the love triangle between Cosette, Eponine, and Marius to be quite unbearable but was actually quite hooked into their story. The intricacies of their relationships, how they evolve, and the emotional impacts of these are more vivid and interesting in the novel. The parellels, or opposites, in the lives of Cosette and Eponine is explained better in the book and turns an irritating story into a powerful narrative and was something that really took me by surprise.

Sadly, it’s the opposite of how I felt with the sections on the barricade. I thought that reading about the characters, interactions and actions of the Barricade boys would be my favourites but they really weren’t. I am not sure if it is because the interactions are better in the musical, whether they are later in the book when my enjoyment was waning, or whether they aren’t written as well as I hoped, but I found myself struggling through the Barricade Books a lot.

Thankfully, the Thernadiers did not disappoint at all. The Thernardier parents were dastardly and vile and absolutely despicable, and if I am honest, I really enjoyed them. They are completely, unashamedly themselves, and use every means necessary to make money, and try and improve their frankly vile lifestyle. They are the kind of characters who don’t have redeeming qualities and the fact that you know they are like this is what makes them so entertaining. They constantly popped up throughout the book and Monsieur Thernadier especially felt like the parallel failure story to Valjean’s redemption arc. I don’t know if this was intentional, or something I read into the book that wasn’t there, but it was enjoyable all the same.

I am pleased that I can say I have read this absolute brick of a book. Most of me did think I wouldn’t finish it, and that I would hate every second, and I was pleased to be wrong on both counts. The book overall wasn’t for me and followed narratives and points in history that I have little interest in, but I am pleased that I managed to find elements that I could enjoy and that I finished the book on time with the readalong.