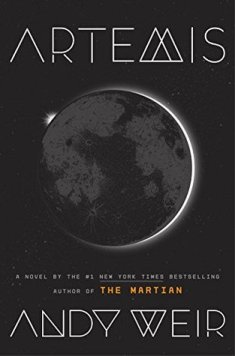 Jazz Bashara is a criminal.

Well, sort of. Life on Artemis, the first and only city on the moon, is tough if you’re not a rich tourist or an eccentric billionaire. So smuggling in the occasional harmless bit of contraband barely counts, right? Not when you’ve got debts to pay and your job as a porter barely covers the rent.

Everything changes when Jazz sees the chance to commit the perfect crime, with a reward too lucrative to turn down. But pulling off the impossible is just the start of her problems, as she learns that she’s stepped square into a conspiracy for control of Artemis itself—and that now, her only chance at survival lies in a gambit even riskier than the first.

Space? Check! Awesome, strong Female Character? Check. Heist? Check. This book has pretty much had everything I could want going into it and when I read it, most definitely didn’t disappoint. My first foray into Andy Weir’s writing was thoroughly enjoyable and brought to life by the exciting and funny narration by actress Rosario Dawson.

The book exclusively takes place in a near future enclave that has been set up on the moon, called Artemis and follow Jazz as she battles to make money without killing herself or anyone else in an increasingly dangerous environment. Sounds exciting right? You would be, in the large part, absolutely correct. The book was fairly fast paced for the most part, and aside from slight pacing issues (some parts when they were slow, were really slow) I thought the book flowed well.

As with any science fiction/dystopian novel, the story must establish a strong history and story and follow it’s own internal logically flawlessly and this book most definitely achieved it. The complicated mix of actual science, current technology and possible technological was fascinating and felt really thought through. This was also the same with the political and judicial systems. Life would not operate the same on the moon as on Earth and so it isn’t the same, but the advancements that saw Kenya’s space programme birth Artemis, and Rudy’s dedication to policing the town, to the factions of race and gangs that are prevalent in the different domes/work fields, were really clever and complete and made the story what it was.

The heist mentioned in the synopsis happened early on in the novel, so I was apprehensive that the narrative pacing would be out, but the evolution of the story as the book progressed was well done. The story evolved to include more and more people and aspects of Artemis as we became accustomed to the world and joined together characters and story ARCs pretty well.

Jazz is pretty awesome and badass. She knows who she is, what she wants, how to get it, and is the epitome of a literary character who should be lauded for who she is. She is the lead character in an odd ensemble of Saudi tradesmen, Hong Kong businessmen, Scandinavian policeman, Brazilian gangs, hilarious technicians and bar men, and pretty much everyone you could want to be a supportive cast that allows the lead characters, a middle-eastern woman no less, shine.

It didn’t absolutely blow me away, which is what has pulled it back from the highest star ratings, but it’s a really good read and an example of something different done well. A special mention has to go to the audiobook narrator Rosario Dawson who brought Jazz and the story to life in a spectacular fashion.