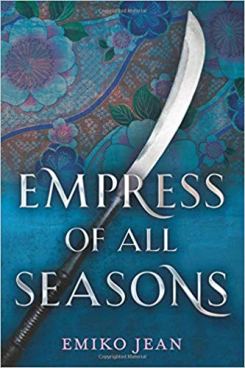 Title: Empress of all Seasons

In a deadly tournament to become empress, any may enter but only one will survive, and one competitor doesn’t just plan to win, she’s going to steal the Emperor’s fortune. . .

In each generation, a competition is held to find the next empress of Honoku. The rules are simple. Survive the palace’s enchanted seasonal rooms. Conquer Winter, Spring, Summer and Fall, and you can marry the prince. All are eligible to compete – all except yokai, supernatural monsters and spirits whom the human emperor is determined to enslave and destroy.

Mari has spent a lifetime training to become empress. Winning should be easy. And it would be, if she weren’t hiding a dangerous secret. Mari is a yokai with the ability to transform into a terrifying monster. If discovered, her life will be forfeit. As she struggles to keep her true identity hidden, Mari’s fate collides with that of Taro, the prince who has no desire to inherit the imperial throne, and Akira, a half-human, half-yokai outcast.

Torn between duty and love, loyalty and betrayal, vengeance and forgiveness, the choices of Mari, Taro and Akira will decide the fate of Honoku.

I will completely admit that this book somewhat fell into my lap as a result of a reading challenge. For whatever reason, I don’t read many novels set in the far-east, so I was interested to hear of a book my friend Emma thought I might quite like and thought it was about time to dive into a Japanese inspired YA Fantasy. I am glad I did, and even though it didn’t set my world on fire, I quite enjoyed it.

I really do understand the point of a multi-perspective narrative, but I have to say that as a fairly avid YA reader, it has been done so much through the last decade that it now has to be done really well to register as something good. I did feel like it served a purpose in this narrative, and we got to see the motivations of the characters from their points of view but also the other protagonists view. It did work to a point, I felt like learning about the characters from inside their heads and from the points of view of the other characters created a much more rounded perspective and really played to the idea that what appear to be villainous or self-serving acts are not always what they seem on the surface or when you see a character’s reasoning.

This leads onto the character’s nicely. Taro, the Prince and the guy that all the ladies are vying for, is one thing to the world (the inventor of a collar that controls all the ‘monsters’, quiet, the cold Prince) and another in the quiet of his own mind and personal space (lonely, an inventor, an introvert, a thinker). I liked that we got to see his Princely side, his obligations vs the life he would have liked, how his inventions impacted him and other characters in the story. I found Taro to be multi-faceted and wonderfully flawed, and thought he was somewhat under-developed, or at least under-used, as a character.

Akira is damaged, emotionally, physically, and is pretty much defined by these characteristics through the book (not in a good way may I add). I realise that there is an element of love triangle and mixed emotions/affections throughout YA literature, and I thought in this book it really wasn’t necessary. I know Akira was somewhat needed to enable the revolution, but I didn’t like his story and found his chapters to be more arduous to read than those of Mari and Taro. He is an emblem of her town and her former life, but he knows what her monstrous characteristics are like and he knows nothing can ever happen between them so is pining and chasing after something that isn’t probable.

Mari is strong. She is fierce. She doesn’t have the easiest upbringing and has been taught to literally fight for her life, understand how to kill and what that feels like, and to become a fearless stealer of male fortune. I have to say, monster or not, she is pretty damn powerful and battles through some rubbish circumstances. She is never presented as the prettiest or the strongest, more the kind of girl whose whole is greater than the sum of her parts. While her motivations to engage the Prince are questionable, and realistically are not those we would expect of the heroine, I still like her and like that her motivations were not as noble as those often found in similar books.

The real problem came with the execution. The premise of the book was actually really good, and some of the description and detail about Japanese monsters and culture was superb, but it didn’t gel quite right. The book itself, while not awful, never set alight in a way that a powerful, action packed story like this should have. I really don’t want to say it was badly written, because it felt like a labour of love written by someone who wanted to showcase a fantastical representation of their culture, but ultimately, it could have been a lot better. Whether this was editing or simply the quality of the words written, it wasn’t the book it could have been, and that is why at the end, I was somewhat disappointed.

There was nothing actually wrong with this book. In a lot of places, it was actually quite good, but it lacked the spark or writing talent to take a good premise from a solid, alright read into something exciting and memorable. I liked it, I’d go as far as to recommend it to YA fans and those wanting a far-eastern inspired fantasy, but it lacked something that made it special.

3 thoughts on “Empress of all Seasons | Review”