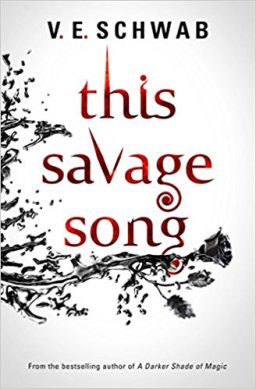 Kate Harker and August Flynn are the heirs to a divided city, a grisly metropolis where the violence has begun to create real and deadly monsters. All Kate wants is to be as ruthless as her father, who lets monsters roam free and makes the inhabitants pay for his protection. August just wants to be human, as good-hearted as his own father – but his curse is to be what the humans fear. the thin truce that keeps the Harker and Flynn families at peace is crumbling, and an assassination attempt forces Kate and August into a tenuous alliance. But how long will they survive in a city where no one is safe and monsters are real …

I absolutely adored the first book in the Monsters of Verity duology. This Savage Song was beautiful and twisted and full of monsters, and showcased Victoria’s immense ability to show just enough of a story to pique your interest without showing so much you can’t infer and imagine yourself. Our Dark Duet was dark and showed just how damaging physical and mental scars can be in a terrifying world.

We’re introduced to Verity, to Kate and the Harkers, to August and the Flynns, and to a world of monsters simultaneously quickly and slowly. Victoria Schwab is a master of showing just enough information to the reader that allows you to infer what you wish to read, and imagine the worst of the best of anyone and everything in her stories, and this is a text book example.

Verity is a city under chaotic law. It is ran by the Harkers in the North, who rule with violence and terror, and the Flynns in the South, who rule with support and protection. It showcases the old adage of something being two sides of the same coin, and depending which type of rule you have a natural affinity to, or feel like is better than the other, then influences how you perceive the entirety of the book. It is always the case that no story is the same for any two individual readers and I feel that has never been the case quite so much as with this story.

The monsters themselves are terrifying. Victoria has created a trio of monstrous species that feed on fear, souls, bodies, darkness, and no matter who you are will incite a level of dread within you. She was tapped into the subconscious of the reader, and without realising, you begin to fear the monsters to differing degrees. She cleverly refrains from completely telling you about them, drip feeding enough for your imagination to fear the worst, and giving rhymes and lines that are italicsed and highlighted to make you scared. It works incredibly and creates an instant level of fantastical mystique that other dystopian/fantasy books don’t have, and absolutely supports the chaotic enforcement of the Harkers and the Flynns.

The story itself actually follows the Harker/Flynn offspring as they meet and face their respective world’s (somewhat) side by side. Kate/Katherine is the daughter of Callum Harker – the feared monster keeper and violent enforcer of the North City. She takes no prisoners, is manipulative, and possesses all the fearsome qualities that he father has. She may purposely get kicked out of schools, and use the people around her, but she is honest and surprisingly moralistic, and fiercely stands up for herself. I actually found that I really grew to like her through the story and felt her character arc was really strong.

Henry Flynn’s ‘son’ is Sunai monster August. He reaps souls, has blackouts, and is probably one of the nicest and wettest characters you could imagine a monster to be at the beginning of the book, which feels like an immediate contradiction. I think this apparent dichotomy in traits is what makes August so fascinating and what ultimately makes his relationship with his family and with Kate so intriguing. He is undoubtedly my favourite character, he brings moralistically good traists of a monster to the front when they’ve been previously described as the worst in the book, and is in opposition to Kate’s human but troublesome point of view.

This book was simply wonderful. It changed the landscape of 2 person him/her points of view. It explored the adults in their lives, and in many respects did not make them knowledgeable, or responsible for their children’s actions, or in any way made them completely morally good. This story travels through a world that is undoubtedly grey, rather than black and white, and really showcases how different your upbringing can be in the same world depending on who or what you are within it.  It’s an astonishingly good genre-breaking book that also occupies all the rules that made YA fantasy/dystopian so recognisable and popular.

2 thoughts on “This Savage Song | Review”