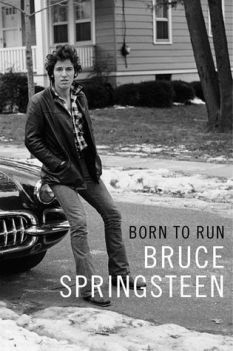 ‘Writing about yourself is a funny business…But in a project like this, the writer has made one promise, to show the reader his mind. In these pages, I’ve tried to do this.’ —Bruce Springsteen, from the pages of Born to Run.

In 2009, Bruce Springsteen and the E Street Band performed at the Super Bowl’s halftime show. The experience was so exhilarating that Bruce decided to write about it. That’s how this extraordinary autobiography began. Over the past seven years, Bruce Springsteen has privately devoted himself to writing the story of his life, bringing to these pages the same honesty, humour and originality found in his songs.

He describes growing up Catholic in Freehold, New Jersey, amid the poetry, danger and darkness that fuelled his imagination, leading up to the moment he refers to as ‘The Big Bang’: seeing Elvis Presley’s debut on The Ed Sullivan Show. He vividly recounts his relentless drive to become a musician, his early days as a bar band king in Asbury Park, and the rise of the E Street Band. With disarming candour, he also tells for the first time the story of the personal struggles that inspired his best work, and shows us why the song ‘Born to Run’ reveals more than we previously realized.

Born to Run will be revelatory for anyone who has ever enjoyed Bruce Springsteen, but this book is much more than a legendary rock star’s memoir. This is a book for workers and dreamers, parents and children, lovers and loners, artists, freaks or anyone who has ever wanted to be baptized in the holy river of rock and roll. Rarely has a performer told his own story with such force and sweep. Like many of his songs (‘Thunder Road’, ‘Badlands’, ‘Darkness on the Edge of Town’, ‘The River’, ‘Born in the U.S.A.’, ‘The Rising’, and ‘The Ghost of Tom Joad’, to name just a few), Bruce Springsteen’s autobiography is written with the lyricism of a singular songwriter and the wisdom of a man who has thought deeply about his experiences.

I am definitely going to preface this review by saying that I am a big Bruce Springsteen fan. I have listened to Bruce Springsteen and the E Street band for as long as I can remember, my parents love him/them too and so his music has been present in my life for a long time. His music is my go to driving soundtrack, and he is probably the best act I have ever seen live (Sorry Paul McCartney!) So it goes without saying that it was probably inevitable that I was going to like this book to some degree, but I wasn’t ready for the blunt honesty, hard truths, and eye-opening stories that this book contains.

It starts like all good stories, at the beginning of his life. I know he stands for the blue collar worker, the dreamers and the drifters, the workers and the ‘normal person’ but I wasn’t aware of his background, his incredible lack or wealth and what could at some points be called poverty, and his battle to take him from a nobody to THE somebody in rock music. His childhood is by no means ‘hard’. He affords to buy something, even if it’s not nothing, and he has a very strong family unit, that while dysfunctional when it comes to his father, is clearly one he values and treasures and has carried over to his family unit with his wife and children.

It think we can all sympathise with the idea of wanting something so bad that you’ll do anything to get it, but very few of us actually live that life until we get it because at some point, the drive or ability to proceed dissipates. Whether it’s buying a sub-standard guitar to practice, driving cross the USA when he can’t actually drive, or playing club after club, night after night for less recognition and money that any aspiring rock artist would hope for.

What becomes abundantly clear is Bruce is self-confident, self-aware, and talented, a mix required for any precocious talent. At no point during his career, whether demanding his parents buy his first guitar, whether creating his first band, or whether entering the Rock ‘n’ Roll Hall of Fame, he believes he is worthy of his successes alone. He embraces and praises those around him, but he believes in his ability to get himself there, or back there, and has done throughout his life. It’s inspirational, and makes you really think about what you want in your life and how you change you plans and influence your decisions to go after it.

I think there is an element of success that changes relationships and probably creates artificial ones. Bruce is candid and open when discussing relationships we have only heard about through publications and rumour mills. He is brutally honest about the personal deficiencies that led to the break down of his first marriage, and how much fellow E-Streeter Patti is responsible for stability and consistency that he would not have otherwise achieved. He opens up about his love for his fellow band members and is incredibly retrospective when looking at their importance in his work and his life, and how those relationships have evolved (and how they may not have if they hadn’t found fame and fortune). His relationship with his dad is a reoccurring theme through the book and has clearly had a profound impact on many of the life, love, and working choices he has made and I very much get the sense that opening up about this has been some what cathartic for him.

Finally, he looks upon himself with an open eye. He does not sugar coat his hardships and his flaws, nor down play his successes and finances. He is honest about his ongoing battles with mental health and depression, a conversation rarely heard about amongst rock royalty or high thought of musicians. His introspection makes you think about your own life and position and happiness and subconsciously helps you think about where to go next and how to find your next path – be it who to ask or which decision to make.

This book was more than just a trip down memory lane. It encompassed so much more than the hits we know and love and really made me understand and see Bruce Springsteen for who he was and still is. Any Bruce or E-Street fan who hasn’t read this should seriously think about getting a copy, and any music fan should think about reading it! Just like Bruce, simply awesome!