When we planned this trip, we had always planned to spend a decent amount of time in Washington DC and then travel up to New York and cram as much into a 24hr period as we could. So, after a last great day in Washington, we were ready to hop on the train and hot foot it up to New York City. I didn’t love NYC last time I went. I mean it is impressive, it’s good, but it’s not completely my cup of tea, so Emma and I were going to experience things more up her street and see if that changed my mind.

We headed out early after deciding to get an early train. That meant breakfast on the go and getting to introduce Emma to another one of my favourite American eateries: Einstein Bros. I bloody love bagels and this shop makes bagels in all the flavours, so armed with bagels and coffee we waited for out train and boarded Emma’s first Amtrak. You can tell these trains travel so much further than trains in the UK, they’re comfier and have more leg room and the wifi is both reliable and free! It took a couple of hours and we passed through a couple of states, but at the end of the journey we were in Penn Station in the heart of Manhattan. Our first port of call was out hotel which meant trudging 8 blocks to Times Square. I know, this shouldn’t sound like a slog, but with suitcases on busy NYC streets, it wasn’t the easiest thing I have ever done. But we made it to The Knickbocker and found our room was both ready, and pretty darn amazing! It had location location situated at 6 Times Square, and was luxury beyond anything I’ve ever paid to stay in (thank you Avios collecting!) It gave us a central base and meant that we were close to almost everything we wanted to readily see. After settling ourselves and unpacking, we set out for the local Chipotle that was opposite Bryant park and began an epic tour of New York sights.

First up was the New York Public library (the classic building, y’know, from The Day After Tomorrow and Sex and the City). I had never been and it was somewhere that Emma wanted to go to and I wouldn’t mind visiting, so we went inside. They had an amazing map room, and reading rooms, and an awesome shop that we may have spend money in. There is nothing quite like a good library. After passing Patience and Fortitude (the lion statues either side of the entrance) we continued along 42nd street until we hit Grand Central Station. 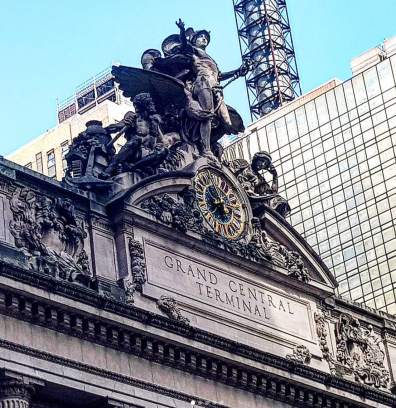 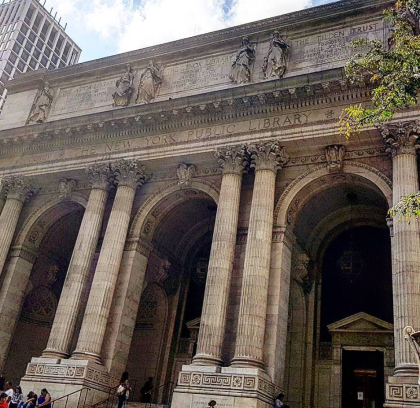 The great thing about Grand Central station is that it is completely free, something that was a theme when it came to things to do in New York. We had a look at the outside and snapped some pictures of both the station, and the Chrysler Building aka Emma’s favourite building in New York (side note: you can go into the atrium for free, it’s all Art Deco-y and cool – wish I had known this when we went). The inside of Gran Central is huge, so we opted to stand at the top of the stairs, take some pictures, and then walk through to the other side.

Once we left, we decided that we would head to The Strand Bookstore, pretty much top of Emma’s list. We started at 42nd street, and after some googling, discovered the book store was down on 12st. We don’t really do getting the subway/tube when we don’t have to, so decided we were just going to have a leisurely stroll down. On the way we managed to take a route that took is to the bottom/side of The Empire State building to tick that off, and then down to Madison Square Park and The Flat Iron building. If you plot the right course through New York City then you run into some cool stuff, and awesome open spaces, which we used to out advantage and used to have a break and to take in the buildings around us.

After photographing the flat iron, we then walked the last 13 blocks to The Strand. It was super impressive. There was miles of shelving containing all sorts of books and bags and bookish paraphernalia. I still don’t think I quite understand how I spent no money at all and how Emma didn’t bankrupt herself. I was sceptical that it was worth the effort when we were walking down but I was pleased we had been when we were walking back, especially as we had managed to go such a scenic route down that took us by some of the city’s most famous and impressive attractions. Our hotel was a welcome relief when we did reach it, we didn’t even spend too much time actually looking at Times Square before going inside, having a welcome sit down, and thinking about our evening. We didn’t want to miss out on staying round the corner from Theatre District and Broadway, but shows are really expensive in NYC, so we followed the advice of other theatre goers and picked up a ticket to see Phantom of the Opera at the Majestic Theatre. We also wanted to make the most of being in a city known for it’s Pizza, so once we were showered and changed and all dressed up, we set out for John’s pizza off Times Square. John’s is a pizzeria in the thick of it that’s been around since the 20’s and is built in a converted church – it has the paintings and stained glass and everything! It was also opposite the theatre, so we had a pizza and beer before walking across the road to take in the show. It wasn’t disappointing as such, I love Phantom and even though it wasn’t the best version of the show I’ve seen, we could tick off watching a Broadway show (you can read a review of the show we saw here). 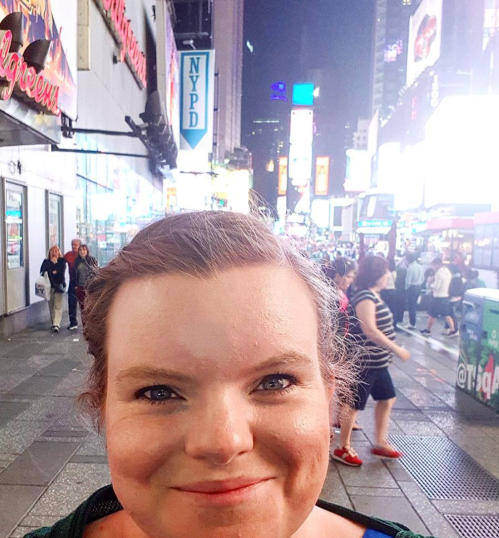 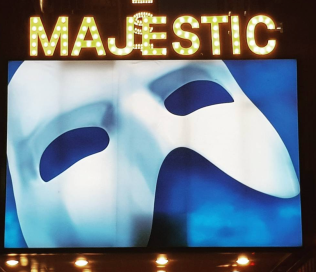 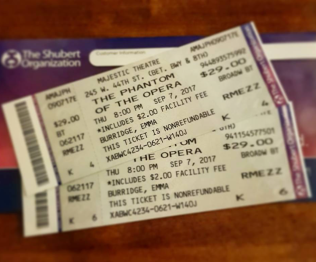 After leaving the theatre, we did one last classic tourist thing to round off a busy day. We had to pass through Times Square to get back to our hotel so we spent some time wandering round, taking pictures of the square lit up at night, of our hotel, and of general tourist things that we hadn’t spent much time appreciating despite spending time staying on Times Square itself. We were supposed to have an early night, but after packing and winding down we went to bed a little later and a lot more tired than expected.