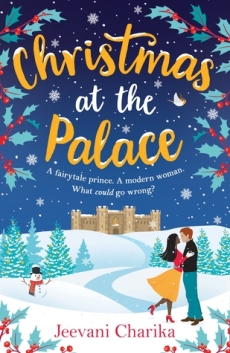 Title: Christmas at the Palace

Campaigner, feminist, doctor, humanitarian – all words that Kumari would use to describe herself. Potential princess? Not even in the vocabulary.

But when Kumari’s charity work catapults her into the limelight and brings her to the attention of Prince Benedict – playboy prince and sixth in line to the British throne – all bets are off.

Royal party boy, charming rogue, England’s most eligible bachelor – Prince Benedict is all those things. Or at least he was. These days he’s taking life more seriously, following in his dear mother’s footsteps and focusing on charitable causes.

When he meets Kumari the attraction between them is instant. But, according to the press, Prince Benedict might just have found the most unsuitable bride.

Will love win the day?

I received this book from the publisher in the hopes that it would be all the best kind of Royal fluff, Christmas magic, and light-hearted fun. Last year, we had the Netflix classic The Christmas Prince, and I was hoping this would be the written equivalent for this year. IT WAS, AND SO MUCH MORE.

Let’s address something first and foremost: is this Harry and Meghan fan-fiction with a personal/original female character twist? I am sure the author could twist my arm to say no, but I kinda think it is and with everything that has happened with the royals this year, it was exactly what i wanted. I’m so pleased it was written and published, it was a breath of fresh air.

I’m not going to lie to you folks, I demolished this book. I started reading it at midnight, I thought a couple of chapters would get me hooked and I could finish it on my birthday (14th November) as a little present to myself. I did put the book down, at 4am, when I had finished it. Should I have stopped reading earlier so I was less tired for work, unquestionably? Do I regret it? Absolutely not.

I love that Jeevani has written a strong, female, BAME, STEM character. I don’t know if it is box ticking, or whether this is a character that she wanted to portray, but what I can say is Kumari is fierce and she is inspirational. She faces racial and gender discrimination throughout the book, and we see her both hurt and hardened by it. We understand her struggles and we watch her face them with grace and integrity, and make progress by putting people in their place appropriately and proving herself over and over again.

She also thinks through the decisions she makes, and doesn’t just consider the effects on her, but those around her. She considers the negatives of relationships with a royal, she had realsitc and sometimes heartbreaking thoughts and conversations when expressing this viewpoints with Ben, with her family, and her friends, and she actually takes their viewpoints and opinions on board rather than ignoring them for selfish gain.

Prince Benedict, Ben, also balances the difficulties of modernising an institutionalised royal family to allow his relationship to work and to be accepted. He fights for both sides with compassion and consideration, and even though his loyalties are regularly split, he engages with those effected to compromise and to make Kumari’s integration into the Royal family seem believable.

I adore that he is cheeky and goofy as ‘Ben’. He seeks normality in a crazily un-normal world, and accepts how different his life genuinely is from the average person. He clearly has the charm and charisma we see real-life Prince Harry portray, and I think the slightly flawed background, the military history, and the wilder lifestyle the Prince is a brilliant contrast to the normal Ben we see when he is with Kumari.

The thing that makes this book stand apart from others, other than the humour and the glimpse into an unattainable relationship, is that the real life issues you would face with this type of relationship are acknowledged and not just brushed under the carpet. We see them attempt to date in secret and feel the anxiety caused by not being able to talk openly about who she is dating, sharing a picture, writing a mobile number down. We feel how the connections between friends and family change, and that she is not OK with it. Many stories would simply write this out, or pretend like it was OK, but Charika addresses them and has her characters talk about it which is incredibly refreshing. Yes, this sort of relationship would change anyone’s life on a major scale, but it’s interesting to see the mesh of cultures and how those waters are treaded and battled through. She does well to show the characters compromising and finding ways to them to remain themselves with their own values and no simply to become the other person. We also see their relationship blossoming organically over a more reasonable time frame. It’s not a month, or 2 weeks, but rather a year, which feels much more relatable and real.

The little touches, enjoying her mother’s cooking, her parents neighbours looking out for them when the media finds out, her friend’s obsession with the attractive men in the world is all so genuine that you find yourself swept up in a brilliantly crafted world and story. I loved it, and I sincerely hope that these is a sequel, I want more Ben and Kumari!

If you love fluffy contemporary, and authentic romance; if you like Royals and strong female characters; if you loved The Christmas Prince, this is most definitely for you!

4 thoughts on “Christmas at the Palace | Review”