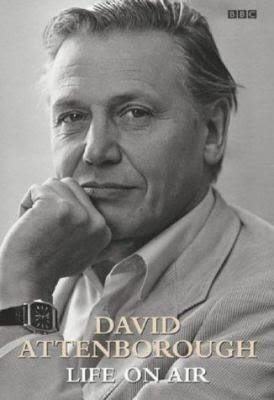 Title: Life On Air: Memoirs Of A Broadcaster

Sir David Attenborough is Britain’s best-known natural history film-maker. His career as a naturalist and broadcaster has spanned nearly six decades, and in this volume of memoirs Sir David tells stories of the people and animals he has met and the places he has visited.

His first job – after Cambridge University and two years in the Royal Navy – was at a London publishing house. Then in 1952 he joined the BBC as a trainee producer, and it was while working on the Zoo Quest series (1954-64) that he had his first opportunity to undertake expeditions to remote parts of the globe, to capture intimate footage of rare wildlife in its natural habitat. He was Controller of BBC2 (1965-68), during which time he introduced colour television to Britain, then Director of Programmes for the BBC (1969-1972). However, in 1973 he abandoned administration altogether to return to documentary-making and writing, and has established himself as the world’s leading Natural History programme maker with several landmark BBC series, including Life on Earth (1979), The Living Planet (1984), The Trials of Life (1990), The Private Life of Plants (1995), Life of Birds (1998), The Blue Planet (2001), Life of Mammals (2002), Planet Earth (2006) and Life in Cold Blood (2008).

Sir David is an Honorary Fellow of Clare College, Cambridge, a Fellow of the Royal Society and was knighted in 1985. He is also Britain’s most respected, trusted and lauded natural history broadcaster and writer, championing conservation and standing at the forefront of issues concerning the planet’s declining species. A lot has changed since his first television documentary, and in this updated edition of Life on Air Sir David tells us of his experiences of filming in the 21st century.

There are some people in this world that I could listen to forever, and David Attenborough is firmly on that list. When I saw his memoir was available from my local library as read by him, I decided to request it with the sole purpose of listening to him, and less about the content of the book. I was absolutely blown away, the detail and the knowledge I gained was extraordinary, I had no idea just how interesting his life actually was or just how many places he has actually visited.

The title ‘Life on Air’ meant very little to me going in to listening to this book, but at the end, i realised just how clever and relevant the title actually was. His memoirs cover a multitude of things, and to review them all requires sections. We all like a good breakdown of points, so I’ve tried to split my review up a little bit.

Let’s be honest, Sir David Attenborough is an absolute legend, and I think many of us would jump at the chance to be him, or just to meet him. His voice is so easy to listen to, and no matter how long you hear it for, you never get bored or switch off. His life, well, that’s equally as interesting and entertaining.

The book takes what seems to an honest view of Attenborough’s post University life, from the start of a broadcasting career to the days post Planet Earth I. It dips in and out of his job titles and duties at the BBC and as a freelance broadcaster, detailing the duties he has in his role and what that means for his every day life, and of course his family.

He has led an incredible life, visiting new places for months on end, and leaving behind a family and ever growing menagerie. His wife, who stays at home to look after the children and the expanding number of animals, seems far from the long suffering partner. Enabling him to get away, she helps care for species brought to the home and actively supports his endeavours; his kids equally as interested in his adventures.

I thought I knew a lot about Attenborough before I listened to his memoir, but it’s clear that couldn’t be further from the truth. I didn’t realise he started from the bottom at the beginning of the BBC and worked his way up through broadcasting, and definitely didn’t realise just how many senior positions he had held or the influence he had over the evolution of the BBC.

I am used to a life with hundreds of channels on the TV, HD is almost standard viewing now, and with on-demand services, there is always something to choose and watch. I can’t really comprehend days without TV as standard, without colour pictures, and without a multitude of channels, but Attenborough presents this reality superlatively, and thoroughly explains how TV has evolved.

I don’t think I have really ever thought about how a TV show is made. Sure, i know it has to have the right combination of broadcasting talent, lighting, sound, and camera work, but I don’t think I ever quite considered how this was captured on the move, especially 50 years ago. David heaps praise on his companions and colleagues, and doesn’t shy away from explaining how film making was, and how it is now; thoroughly filling the reader/listener in on the complexities of doing this in a rainforest or in a studio.

It is clear throughout that Attenborough is quite proud of the BBC and all of it’s achievements. He talks (well writes) with a sense of achievement at what the BBC did under his leadership, and about the adventures and TV shows that he was part of creating and presenting. Many of these shows have changed the face of broadcasting irrevocably and have been vitally important for both ecology and anthropology.

I love me some pretty animals and amazing scenic shots. I love me a good nature show. I own Planet Earth/Planet Earth II on DVD, and eagerly watched every episode as it aired live. I’ve always been this way, and if I am honest, how they made these shows and how they have evolved was one of the most exciting things about reading this book.

I really loved hearing about the methods used for catching the animalistic behaviours that the film-makers wanted to capture. Yes, I think we all know that the scenes are ‘manipulated’, but I loved hearing about the hard work, the lengths, and the planning that went into capturing these moments. Some of these scenes are the first time that the world has seen them, and many of them resulted from days and weeks hunting and waiting, which we don’t see or appreciate when we’re watching the finished show. I was surprised to find out just how many species and behaviours were previously unknown or unviewed before Attenborough and his Bristol team began making Natural History shows.

Ecology aside, some of the anthropogenic moments that Attenborough captured and experienced were eye-opening. I am very lucky to have travelled to some pretty incredible places, but I don’t think I really appreciated the complexities in tribal languages, cultures, conflicts, and territories, and that these would be so prevalent around the world. Hearing about how these were researched and overcome, and how many issues that these caused during the making of his many shows, was incredible.

I absolutely adore travelling. I have travelled reasonably extensively, and have seen lots of places and cultures. I now work in travel, and live to see new places, so hearing all about Attenborough’s exotic adventures has been unbelievable. I’ve added places to my bucket list that I was barely aware of. I’ve heard about new places and how older places have evolved over time. It’s given me the travelling bug all over again. It’s also refreshing to hear about someone travelling well into their later years. For a long time I have thought about seeing all of these places while I was young, or I would never be able to appreciate them, so it’s nice to hear about someone revisiting old haunts and seeing new sights (even into their 80’s.

This book was more heart-warming, more eye-opening, and more educational than I could have ever dreamed it would be. It’s a must for and Attenborough fans, and anyone into natural history or broadcasting, but it’s also thoroughly enjoyable for anyone who wants to sit and enjoy learning about the world around them. Undoubtedly one of the best audiobooks I’ve listened to!

Different day. Different drink. . . Same chair. Same books. . . . #books #bookgram #booksofinstagram #armchair #bibliophile #igbooks #igreads #reading #readingchair #harrypotter #gryffindor #OWLsReadathon2020 #currentlyreading #amreading #agoodgirlsguidetomurder #murderontheorientexpress #beer #coorslight
Honestly, find me a better evening (outside Disney World or Anfield) than this #cosyreadingnight/#OWLsReadathon2020 set up . . . #books #reading #readathon #amreading #currentlyreading #booklover #tgif #cider #chocolate #murderontheorientexpress #agoodgirlsguidetomurder #harrypotter #armchair #gryffindor #elephant #bookgram #bookstagram #booksofinstagram #bibliophile #igbooks #igreads
It was nice to get outside in the fresh air today. The park was quiet, the flowers were out, and for a moment you could forget about the absolute mess the world is in right now. . . #wellness #wellbeing #mindfulness #socialdistancing #park #seftonpark #daffodils #flowers #walk #park #sun
Taking this weekend to build furniture and think about the house. . . It won't stay here for long, but for now I have a reading chair in what I am dubbing classics corner. After months without a sofa or chair, it's nice to have somewhere proper to sit and relax if/when I need to. . . Coronavirus may be causing mayhem at work, craziness at the shops, madness on social media, and have cancelled my holiday, but it's giving me time and drive to get things done inside. . . . #books #reading #bookstagram #bookgram #booksofinstagram #readingchair #armchair #classics #bookshelf #igbooks #igreads #teamdarkroom #homereno #ikea #furniture #renovation #covid19 #CoronaVirus #coronapocalypse
New phone day is about all that is good about this Friday . . . #samsung #samsunggalaxy #galaxy #s20 #samsunggalaxys20 #newphone
All libraries start with piles and piles of books, right? . . Even though I have felt pretty dreadful over the last 36hrs, house things have moved forward with the help of @askirmishofwit and my Mum. I'm sat here feeling sorry for myself dreaming about the library that will eventually be in our house! . . #library #homelibrary #books #Bookstagram #bookgram #booksofinstagram #bookstack #homereno #renovations #igbooks #igreads #bibliophile #reading
I can't wait to have out books back on show instead of sadly stacked in the corner . . There are some phenomenal worlds and spectacular stories and magical memories held in these piles! . . #bookblogger #booksofinstagram #bookgram #bookstagram #igbooks #reading #igreads #decorating #renovations #homereno #harrypotter #veschwab #leighbardugo #stack #bookstack
On Saturday nights we.....like to sit in the house, read books, and drink tea! . . I fancied reading something a bit different, but I also wanted to read something that has been catching my eye for a while. So, after staring at them both for 10mins I decided I should just read them together. . . What are you currently reading? . . #currentlyreading #amreading #bookblogger #bookgram #bookstagram #booksofinstagram #tea #mug #igbooks #igreads #agoodgirlsguidetomurder #codenamebutterfly #reading #teamdarkroom
Sunday afternoon = treat yo'self #starbucks #coffee #mexicanfood #burrito #macchiato #treatyoself #sunday #sundayfunday #foodgram #foodstagram #igfood #igeat #igcoffee