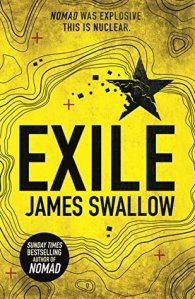 A disgraced Russian general, with access to the real thing.

A vengeful Somali warlord, with a cause for which he’d let the world burn.

A jaded government agency, without the information to stop him.

Only one man sees what’s coming. And even he might not be able to prevent it . . .

Racing breathlessly from uncharted CIA prisons to the skyscrapers of Dubai, from stormbeaten oil rigs off the African coast to the ancient caverns beneath the city of Naples, Marc Dane returns in the incredible new action thriller from the internationally bestselling author of NOMAD.

NOMAD WAS EXPLOSIVE. THIS IS NUCLEAR.

I received an e-ARC of this book courtesy of Bonnier Zaffre and Net Galley in return for a fair and honest review. (I also bought the paperback version of the book post-release.)

I am going to start this review by saying that I absolutely loved the precursor Nomad. I am a huge fan of thrillers, and absolutely loved the fresh take on a saturated market. We’re all used to the Jason Bournes and the James Bonds of the world, so it’s nice to have a hero who is (genuinely) reluctant, who is willing to ask for help, and who is more comfortable behind a desk or with a computer. So, when I saw that Exile was on Net Galley I absolutely jumped at the chance to read it before it came out. Sadly, due to my technical incompetence, I could never it it to open on a readable device, so I waited until now (when I also owned a paper copy) to read and review it.

A good thriller must have a fast paced, ever evolving plot. It must have characters that, however flawed, are likeable and that you really believe will get the job done no matter the hardship. There must be an antagonist that has a purpose. And then, when all that is achieved, the author must be skilled enough to weave a tale that incorporates all these intrinsic elements to create a story that can’t be put down. This is EXACTLY what James Swallow is good at.

Where Nomad had a few too many strings and felt rather unpolished, Exile felt like the finished article. The story was simple: some good guys chasing some bad guys who have a very bad weapon before they set it off or sell it to some even more shady. The complexity of the narrative came from the intelligence of the antagonist and the reactionary behaviour of Dane and Keyes, the main heroes of the show.

Marc Dane is an ex-MI6 field agent who is less about the front line action and more about being the techie backup. He is at home behind a computer, but also has all the skills in his arsenal to be able to ‘wing it’ when he is called into action. He is a refreshing lead man, he knows his strengths, but more importantly, he knows his flaws and when he needs to ask for help. I know that all heroes have almost superhero level skills, but I really believe that Marc Dane knows that he has limits and that he needs to survive within them (even if it’s close to the line) in order to keep the story going.

Lucy Keyes is a badass, hold no prisoners, black ops agent for Rubicon (a ‘spy’ agency ran by eccentric Somalian do-gooder Ekko Solomon). She swooped in to pretty much save the day in Nomad, and when things go wrong in Exile, Dane calls in her expert help again. She really is the epitome of a strong female character, and not only that, she doesn’t rub your face in it. I really like the fact that a male author has wrote such a brilliant female character, without accidentally making her dis-likeable.

I also love the fact that Dane goes to her for assistance and relies on her expertise, not the other way round. He doesn’t do it to amuse her, or to woo her, he does it because she has skills that he is lacking and that makes them compatible as a force. The author has not made these a romantic pairing. They trust each other, and I get the feeling that they enjoy each other’s company, but they haven’t been forced together under the stress of a gun fight in an unimaginative and unrealistic way.

The story centres completely around an illicit transaction of a small nuclear warhead from a Serbian Gang to a Somalian Warlord. We then hightail it around the world with Lucy and Marc in pursuit of Ramaas and his weapons through some fairly spectacular scenery, including Dubai, Croatia, and Somalia. A vast portion of the book took place in Croatia and Mogadishu, two very different countries in history, culture, language, and just about everything else. The knowledge and research that Swallow must have put into understanding and including customs and quirks from all the nations mentioned is astounding and really adds a level of depth and quality to the story, and to his writing as a whole.

Yes, OK, there are scenes within the story that are spectacular and borderline unbelievable (surviving totalling a high speed vehicle, only to steal a police car – which just happens to be a Bugatti Veyron super car – only to crash that as well, and live to tell both tales), but it wouldn’t be a thriller without such scenes. They are approached well, and when they arise, they are navigated with a smooth efficiency that I have already come to expect when Rubicon are involved. I found that the unusual scenarios, while often ridiculous, just felt more realistic and possible than in some stories, or just more fresh. It doesn’t feel like there is too much going on, or that there are plot lines or scenes that are superfluous to the narrative, it all fits neatly (or explosively) together.

I don’t want to give the whole plot away, because that will completely destroy what is a really great thriller. It helps a little if you have read the first novel, there are characters that re-appear, back-stories that are mentioned, and organisations featured that were integral to the first book’s plot, but it definitely stands up as a stand alone novel too. The previous book definitely falls into a nice to know rather than need to know status.

I can feel the characters growing, and as Swallow gets to know them, we understand them much more clearly. The third instalment in the Marc Dane/Rubicon series is due out later this year (called Ghost) and I am desperately awaiting it’s release. I don’t think there can be any greater endorsement than eagerly awaiting the next part of the story, can there?