Cruising is most definitely something that I could get used to. In theory, it’s not completely my bag, but there is a great sense of enjoyment that comes from falling asleep in one place and waking up in another, especially when you do it in luxury. The last stop on our Caribbean cruise before we hightailed it back to Miami was St. Maarten. The last island of the journey, and second to last destination of our trip. I’d started to get the hang of the early starts, and the big breakfasts, and the heat. 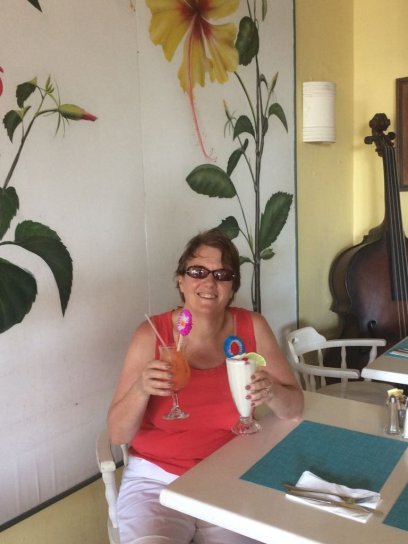 St. Maarten is an island country in the Caribbean. Most of the island is in the Netherlands, a little bit is French Territory, so it makes for an interesting mix of cultures, food, languages, and also makes it a wealthy centre. As we were only stopping for a day, we decided to visit the main town of Phillipsburg, and miss Maho beach (for those who aren’t familiar, Maho beach sits at the end of the island’s runway and is a place that folks can stand directly under the low flying planes as they take off and land.)

When we disembarked the ship, it was hot. Yes, it was the Caribbean so of course it was warm, but it was by far the hottest day. The pier was relatively close to the main town of Phillipsburg, so we decided to forgo the offered transport or local taxis and just walk in. I actually really enjoyed just walking in the sun with a relatively pleasant view, even if it was just along the main road from immigration to the town. The town was setting up for a Heineken sponsored beach festival, where the headline act was due to be UB40.

We had a few stops that needed to be made. We were looking for a post office to send the postcards that we had already written, and we were looking for souvenirs of our trip. There were so many shops all over island, that there was plenty of choice. One thing that became apparent quickly was that St. Maarten was richer than the islands that we had visited before. The shops were (on the whole) more expensive and of a better standard of quality. Yes, there was still the obligatory tourist shops with all the bits and bobs that we wanted to look at, but there was a notable increase in branded shops and jewellers.

We were pretty tired from wondering around the shops so stopped for a drink and some WIFI. It was nice to be able to contact home, and just chill near the beach with a drink. We made sure that all of the postcards were written and addressed, and found the post office on the map. It was right by the lake that sits on the other side of the town (Phillispburg is actually bordered by water on both sides) so we set off to get some stamps and find a letter box, and to see the lake.

The post office didn’t take long to find via McDonalds and a few shops, so we got the day’s job done. The lake, if I am honest, was disappointing. It was a little stagnant, and just not where I would want to spend any time if I had the choice to go through to the other side and sit on the beach. We didn’t spend long there before turning round and working our way through to the beach as soon as possible.

The beach was just amazing. There isn’t a feeling quite like walking along a sunny beach, feeling the sand between your toes and watching the water lap against the shore. It was the absolute stereotypical Caribbean beach experience, and we enjoyed it to the fullest just walking along the front.

No Caribbean experience is complete without stopping in a beach front bar for a cocktail, so we found somewhere that was quiet, with WIFI, and treated ourselves. It was warm, it was sunny, and our drinks had little paper umbrellas. It was a nice pit stop before buying the presents from our favourite stores and making it back to the boat. We had another medical emergency and watched as people raced it back to the ship, while the local emergency services helped a passenger off.

As much as I enjoyed the day, there is a little bit of me that thinks I could reasonably have been in any Caribbean city. I had a great time there, but I don’t think I’d jump to go back for a whole break.

I visited the Caribbean before the devastating effects of 2017’s hurricane season. St. Maarten was hit hard, but thankfully is making slow and steady progress in regenerating the devastated areas

When you got away for the weekend and buy two more books instead of reading the two books you brought with you 😂🙈 . . #sorry #notsorry #yesnomaybeso #theconfessionsoffrannielangton #carlisle #cumbria #minibreak #books #bookblogger #booksofinstagram #Bookstagram #igbooks #igreads #reading
Let's reclaim half the bookshelf with the amazing @TheReadingWomen and have fun with the #ReadingWomenChallenge ♀️ . . Are you taking part? What will you be reading? Do you have any suggestions? . . This was one of the first #bulletjournal spreads I made this year and is one of my favourites! . . I've posted all the details, challenges, and information on my blog, and will be updating through put the year there! Check it out now, link in bio! . . #books #reading #women #feminism #bookstagram #igbooks #igreads #bujo #bujospread #bujoinspo #readingjournal #journal #readingchallenge #reclaimhalfthebookshelf #booksofinstagram #igbujo
Aaaaaand the gallery wall in the new kitchen is done . . There's travel and Disney and books and the best mix of art and quotes and science and I bloody love it . . It's definitely reflective of @askirmishofwit and I, that's what it's all about right? . . #books #art #disney #hauntedmansion #roalddahl #science #stars #space #sciencemuseum #greenwich #elephant #bookstagram #house #kitchen #homereno #homerenovation #gallery #gallerywall
An evening full of musical movie magic . . . #concert #music #classicalmusic #film #movies #superman #batman #piratesofthecaribbean #orchestra #filmscores #LiverpoolEmpire
I mean the simplicity and hilarity of this book dedication should never be under played. . . #books #reading #Bookstagram #booksofinstagram #quote #bookdedication #dedication #gentlemansguide
January comes to an end on Friday and honestly this has been the longest January I've experienced. What are you doing with your Saturday night? . . #cosyreadingnight couldn't have come at a better time, and I'm finally on an early shift and have managed to take part! Loving this page-Turner so far, we're over half way through so it's time to whip out the #Disney mug and the flavoured #tea . . #saturday #saturdaynight #nightin #mug #mickeymouse #books #reading #readathon #flavouredtea #booksofinstagram #Bookstagram #igbooks #igreads #nowyouseeher #mystery #tbr #bookgram
New Year, New Profile Pic! . I hope 2020 is happy, healthy, and prosperous for you! . This is OUR decade! . . #nye #ny #2020 #2019 #selfie #newyear #newprofilepic #newyearseve #happynewyear
The start of the decade at the bottom, the end of the decade at the top! . . To everyone who I have laughed with, travelled with, loved, lost, met, it has been a pleasure, and one mighty big journey! . . Here's to a new decade full of new adventures, memories and moments to treasure! . . #decade #year #2010 #2019 #2010s #selfie #throwback #tb #travel #explore #school #newyear #nye #kenya #scubadiving #russia #stpetersburg #CatherinePalace #wanderlust #adventure #memory
Getting ready for 2020! . 2019 has been a real mixed bag, and in many ways is ending on a slightly difficult note . I'm planning for the 2020's to be my time to shine! I'm giving bullet journaling another crack, and I'm going to make some manageable and enticing goals . How has 2019, and the 2010's been for you? . . #bujo #bulletjournal #bujoinspo #bujoinspiration #calendar #bujocalendar #2019 #decade #newyear #resolutions #goals #qotd #beer #coors