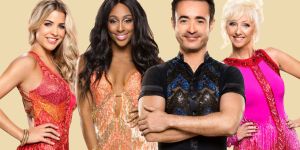 Ladies and gentlemen, boys and girls, you could have been anywhere in the world tonight, but you’re here with us, watching the Strictly Come Dancing 2017 finale. Can you believe it’s the final already?! Joe and Katya, Gemma and Aljaz, Debbie and Giovanni, and Alexandra and Gorka have danced their little socks off, but only one can take home the coveted glitterball. Who will it be?

I wasn’t able to watch Strictly Come Dancing on Saturday last week, so I missed voting in the semi-finals and missed writing a review post. I had a good excuse, I was sat in a theatre in London watching (and enjoying) Les Misérables. I’ve watched it since and thorouggly enjoyed all of the dances, and even though we know it’s all physics and balancing forces, I think Emma is still impressively shocked by Joe and Kate’s counter balance lift. The semi-final also saw the end of Mollie and AJ’s run. I can’t say I’m disappointed as I wanted her or Debbie (or both to go). She just wasn’t as good as everyone else, and her and AJ were starting to simultaneously annoy me and creep me out.

The final always pulls out the stops and really shows who can hold it under pressure. Everyone will dance 3 times: they’ll re-dance their favourite number, try and improve a judges choice, and attempt to wow us with a no-rules, no-holds barred showdance. I love the freestyle showdance and can’t wait to see what they have cooked up for us.

So sit back, relax and enjoy the show, watch the opening pro number here, and remember that from here, there be spoilers!

This round of dances have been selected by the judges, who liked the original dance but want to see improvement in technique and presentation since the first time that they were danced.

I genuinely can barely remember this dance, which is surprising considering the set and the lifts. I think, given that they did a soft dance last week I think this will be stunning. She has come so far with the elegance and the lighter side of dancing.

Wow, that was stunning. The dress, the man, the dance. The lifts got some serious air, and the pair of them looked so beautiful and graceful. It was incredible.

I didn’t like this the first time round. I can remember genuinely thinking that she was going to die during some of the lifts. At the beginning though, we do get Gio saying Debbie which is one of my favourite things from this years show.

The judges have really pissed me off here, it just wasn’t that good. She looked lost through the second half, she nearly fell over coming out of the last lift. It was messy. I’m fed up of hearing she’s good for her age, she entered knowing how old she is.

Ooooo I am looking forward to this, I can remember really liking this dance. I can remember thinking she looked fierce, and the song is great. I think she has improved a lot, and because she did the Tango last week, I think she can really improve here.

OK, so she was still burying her chin a little bit. The intensity, the shaping, the power. Wow, it was so good, I absolutely loved it. Aljaz’s little face when he looked at her. And the end, wow, it was such a spectacular ending. Awwww I’m so proud of her. Her little face, she looks like she’s crying.

I was a little bit gutted when I saw this because all I can remember is the hat, and thinking that I didn’t love it. He has really come along way since week 3, he’s taken to the characters, and his dancing has improved immeasurably. I have high hopes, I love a Viennese Waltz.

Oh his little giggle, it just never ceases to make me smile. He looks so good. Ooooo, we love Shirley, we love a good fleckerl. It really, really looked so effortless. Oh Joe!

The freestyle Showdance is only ever seen in the Strictly final. There are no rules. Any style of dance, any number of lifts, any music. This is going to be exciting.

I have such a high expectation for this dance. This song, that suit, the possibilities. I really hope this is incredible.

Wow. They are just so good. I just loved the mix of dances that came together in that number. It fitted the song so well, and was just incredible. I really wish that I didn’t sometimes find her too over the top and dramatic, because that was something special.

I have a feeling that with this song, it’s going to be all slow and contemporary and ballet like, and that is just not my cup of tea. I’d love to be proven wrong, but I just don’t think it will be. I also think it’s going to be lift and leg central. I just think it’s cheating for a trained ballet dancer to use ballet as their final.

She has just stuck her foot out, and hoped that Giovanni would be able to cope with the spins and the lifts. I just don’t like her, which can’t be changed. I didn’t rate it. I just didn’t. I thought it was cheating, and I just thought it was all him.

I love Gemma. Watching her dance just fills me with joy and happiness, and I feel like she has come the furthest. That said, I also worry the most about her showdance because I think she is (sadly) the least technically good dancer.

She, and he, looked they loved that. I think they really celebrated how much she loves this kind of dancing. I love how fierce and sassy she was, it’s so nice to see her confidence. OK, so it wasn’t quite smooth through the whole thing, and there was one sticky moment, but, wow. I feel like she has lived this whole show

Oh I just love these, and they will push the boundaries of rules and what’s allowed. They will do big lifts, and it will be awesome. I just hope it’s happy because they are at their best when they’re both smiling brightly.

OK, so it took a bit to get going in a way, but it also was all so necessary. It was so cute and entertaining, it was a whole show in one little dance, and that after all is what a showdance is.

The last dance that each celebrity and their professional will dance is their favourite from the series. It’s such a nice way to finish.

This was hardly a surprise. She looked like she had such a good time the first time round. I can definitely see why she has chosen this as her final dance.

I mean wow. The energy, the dance, Gorka, I mean wow, that is just the best thing to go out on. It was just insanely good. You could feel it. It made you want to get up and dance, I mean Shirley and Bruno were up and dancing. It’s one for the vault for sure.

I hate that I like him now, because I am all about him in this suit being all moody. I know this is technically a good dance, but it’s got to the point where I am just fed up of her dancing.

It was pretty much the same as last time for me. Gio is so emotional. Life was so much easier when I didn’t like him.

Look at them. I just, I can’t even. They’re so cute and genuine and inspiring. I ma just so proud of her, which is nice, and I am so pleased that she can see how proud he is. They just look so happy when they dance. I can’t wait for this. I think she is nailed on to cry at the end of this.

Their little aww’s, and smiles, and laughs. Watching them, quite simply makes me happy. That was magical. It was just so effortless. Again, what a perfect dance to go out on. I can’t cope with earnest, proud Aljaz.

This was so good the first time. This is where things changed from being good, to being very very good. I really hope that he nails it again because the character and the dance is so good. I just want to see them laughing and smiling forever.

Watching that was pretty awesome. It was so good and so clean that they almost made it look slow, and not in a bad way, in a way that meant that they had plenty of time for each move. His smile, his happiness, it shone out wide their. His ickle face.

Can you believe it? After weeks of dancing and scores after scores, the finalists are separated by just 5 points!! I have voted, mostly for Joe and a little bit for Gemma, have you? What a final though!

I know that shows often have a habit of saying that they have got a huge star to perform, and that the singer on the show tonight is one of the biggest in the world, but to be fair this week they’re right. Ed Sheeran actually is one of the biggest acts on the planet, I’m just gutted that he isn’t going to do a song that I like. Oh well. He really is such a good songwriter, and often quite a funny guy, which is why it always surprises me that he looks almost shy and embarrassed. I would rather that Karen and Pasha had shoes on, I am never sure about a dance when they aren’t wearing shoes.

I am watching this ‘class of 2017’ dance and thinking about both the gulf of quality between the rubbish at the beginning and the finalists. When you see people like Aston and Davood, it’s a bloody miracle that Mollie made it as far as she did. I also forgot about half of the people in the show, Charlotte, and Brian, and Rev. Richard, it’s been a long old show.

But now, the result, the moment we’ve all been waiting for….

I’m so pleased, and proud, and happy. They were so good, and joy inducing, and actually one of my favourite couples that have ever been on the show. And well, the Neil hugs and smiles at the end made it all the better too. They are thoroughly deserving winners. Well done!

Well, I hope you all tune in like I will on Christmas day, although I won’t be blogging! Until next year….