I have seen this Tag floating around the internet a couple of times in the past few days, and although I have not technically been tagged by anyone, I have decided to tag myself and just give it a go anyways! I love me some Harry Potter, so I thought this was just made for me! I haven’t done that many tags in a while, so I decided to jump on the bandwagon!

Although I have seen this tag somewhere else too, the I actually got this one from Jenn @ A Page of Jenniely. I tag Emma @ The Terror of Knowing and Jessica @ Ever the Crafter, and absolutely anyone and everyone who would like to take part and do it too!

What house are you in?

I’m Gryffindor and proud! I always thought I would be a Gryffindor, and when I finally took the test on Pottermore, it confirmed my happiest hopes and dreams. It has nothing to do with the main characters, and everything to do with the background characters like the Weasley twins, and McGonagall, and the Marauders. Well, OK, and a little Hermione. I just always thought it was the best fit for me!

My Ilvermorny house is Horned Serpent, and while it more closely aligns with the Hogwarts House Ravenclaw, as it favours scholars, it fits as all quizzes I have ever taken have me with a second highest percentage of Ravenclaw traits.

What is your Patronus?

When the patronus feature first came out I scrambled to get on Pottermore and find out officially what my patronus actually was. I was looking all over twitter at what other people had, and saw many people were disappointed, so when I found out that my patronus was in fact a falcon I was absolutely delighted. 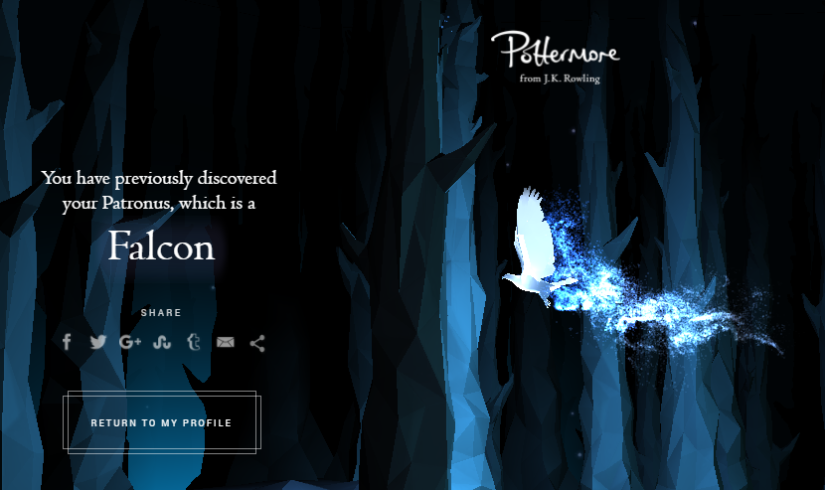 What is your wand?

I have actually been to Ollivander’s Wand Shop in Diagon Alley in the Wizarding World in Orlando, and I have experienced a wand chosing me as a witch. Annoyingly, I couldn’t remember which wand actually chose me (although I would recommend the experience if you do ever visit!) I am not sure if my wand is the best, the worst, or something in between, but it desribed as being: Maple, 10 inches, with a Unicorn Hair core and rigid flexibilty. Some choice snippets from Pottermore all about my wand:

I have often found that those chosen by maple wands are by nature travellers and explorers; they are not stay-at-home wands, and prefer ambition in their witch or wizard…Possession of a maple wand has long been a mark of status, because of its reputation as the wand of high achievers.

Wands with unicorn cores are generally the most difficult to turn to the Dark Arts. They are the most faithful of all wands

What would your boggart be?

This is easy, there is definitely only one thing this would ever be for me. For those who know me, this is a given, for those who don’t, I have an all encompassing and paralysing fear of the Child Catcher from Chitty Chitty Bang Bang. This would undoubtedly be the form that my boggart would take.

What position would you play in quidditch?

I would love to think that I would be a seeker, but I think realistically I would end up being a beater. I always used to play defensive roles in football, hockey, and netball, so I think I’d be most suited to a beater. Plus they seem to have a great time of it.

Would you be pure-blood, half-blood, or muggle-born?

Oh definitely muggle born. I am definitely the first and only member of my family that truly embraces the wizarding world.

What job would you want after graduating Hogwarts? 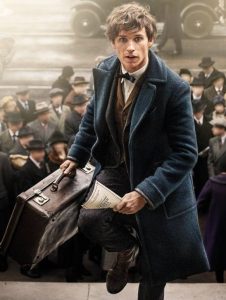 I do really love the idea of being an auror, because who doesn’t want to chase bad guys. I also kind of love the idea of working at Hogwarts as a professor. But, if I was being honest, I would find a way to work in some form of magical travel industry, whether liaising in a travel department at the Ministry of Magic, or investigating Wizarding retreats and holiday spots around the world. Maybe I could write a Wizarding World Travel guide? As much as Newt Scamander is a Magizooligist and not a traveller, his aesthetic as a slightly dishevelled traveller is something that appeals to me.

Which of the Deathly Hallows would you choose?

I think there is no doubting that the Elder Wand is the one to want. In my opinion, the stone is dangerous and leaves you wanting more than you can get. As Dumbledore has shown, an accomplished wizard can render his or herself invisible without the aid of a cloak, so for me it would be the wand. Who doesn’t want the most powerful wand in existence, am I right?

For me, my favourite has always been and will always be The Chamber of Secrets. For me it is everything that I wanted from the series, quirky professors, unusual potions, magical creatures, and mystical happenings. It’s just adventure after magic after pot twist and I love it.

On the flip side, my least favourite is probably The Goblet of Fire. I find the angst levels in this unnecessary, the level of bitchiness is unreal, and the books itself is just a bit too long and a bit unedited. 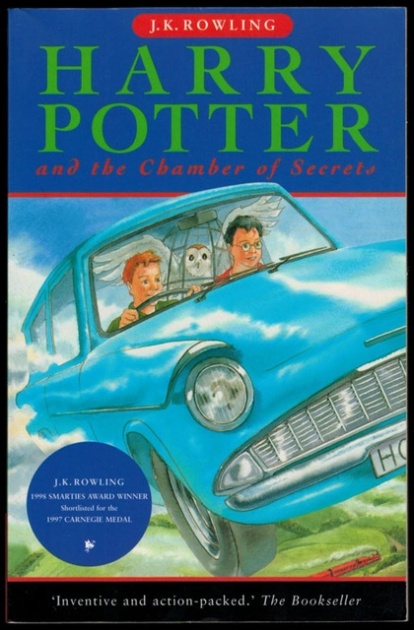 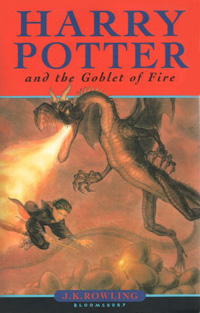 I really like the films, and it’s hard to chose a favourite. There are some great bits in Deathly Hallows Part I, and Prisoner of Azkaban visually is the most stunning film, but I think The Philospher’s Stone is my favourite film. There are so many shots and moments that are beyond magical and still give me goosebumps. Not sure I’ll ever forget that famous shot of the lake and Hogwarts rising above it. Brilliant. 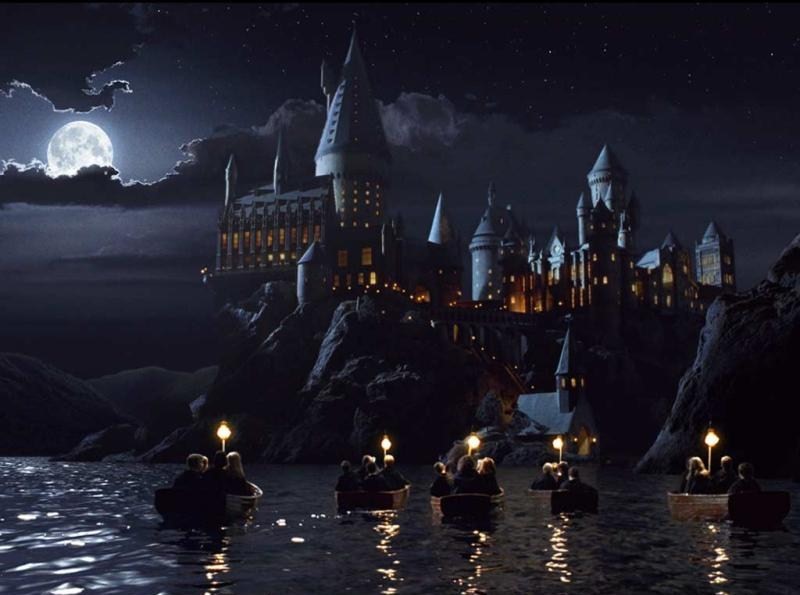 Probably Deathly Hallows Part II. For me, this film was too short (I very rarely say this about any film) and over did the big stand off between Harry and Voldemort. The film just didn’t seem to get that when they face off, Voldemort is just a normal man, so his ridiculous and supernatural death (read bizarre disintegration) is do far removed from what that scene should have been that it irritated me enough that I put this film at the bottom of my list!

Do I have to only pick one? I am a big fan of the Marauders, and think that Remus Lupin and Sirius Black are probably my favourite characters in the book. I can’t help but love their troublesome and scheming school days, and I love their older selves. I obviously love the smarts and the courage of Hermione, and would absolutely want to be her in a flash. 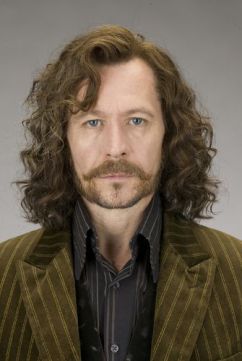 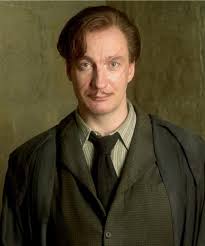 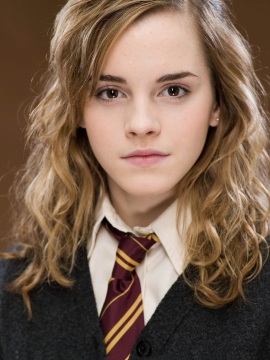 Hmmmm. I am really not a fan of the toad in a bow, but then who likes Dolores Umbridge. She is without a doubt the most detestable character in the later books. I also can’t stand the adult Dursley’s, everything about them makes me annoyed, especially Aunt Marge.

I don’t know. Professor McGonagall is badass and awesome. She can turn into a cat, she can sass like nobody’s business, and she is fiercely intelligent and loyal. But then their is Professor Lupin, who is fun, and interesting, and who is interactive and engages his students. If we’re just saying teacher then I am leaning towards McGonagall.

Well given my intense dislike of Dolores, I would have to say Professor Umbridge.

Do you have any unpopular opinions about the series?

Erm…I suppose my intense love for the second book is quite contradictory to the opinion of many Harry Potter fans. Oh, and that I don’t love Snape. I don’t hate him, but I’m not quite sure I understand the love for Severus!

Please give the tag a go (remember, you’re all tagged if you want a go!)C

Please comment below with the link so I can have a little nose!

6 thoughts on “The Harry Potter Tag”