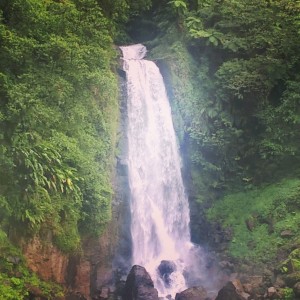 Dominica, the island I had been most looking forward to visiting, the island that wowed me most while I was there, the island that made me want to go back, and the island that instantly became my favourite. It is easy to see how it got the name ‘The Nature Isle’, and of all the islands, it is the one that I am most pleased we got a tour for!

OK, two things before I launch into what is bound to be a longer post than usual. Firstly, Dominica is not the same place as the Dominican Republic. Secondly, the reason I was so excited to go is because some of the Pirates of the Caribbean franchise was filmed around the island, so I wanted to see more of the beautiful places I saw in those films.

After raving about the island and discussing it at length, we decided that an organised tour might well be the best thing to do in Dominica. Mum very kindly looked long and hard into tours of the island, and we settled on a tour that mixed sight-seeing, nature, and activities, from a company called ”Nature Isle Explorers”. We paid a fraction of the price we would have done on board, and were treated to a brilliant, memorable day on the Dominica Jewel Tour!

We were collected at a pre-arranged place in the city the day after Mardi Gras. The city was somewhat subdued after the day of festivities, and the guides were still living with the effects of the night before. Everywhere we went, everything we saw, and everything we learnt, were quickly met with the trip tagline ‘Welcome to Dominica’.

Our first stop was out at the Champagne reef for a spot of snorkelling. This was one of the activities I was looking forward to most for the entire trip, and would allow me another look into a unique underwater world. After a breath ride through the town, and a short history lesson from our awesome tour guide ”Chatterbox” Alan.

The island of Dominica is so volcanic that the beaches are black (which I loved to see), and the magma chambers below the surface heat the water to boiling point, allowing little gaseous bubbles to rise from the seabed like bubbles rising in a champagne flute. We got to snorkel across the reef and see the bubbles, but also lots of different fish, coral, and even a baby moray eel. It was pretty awesome. An added bonus was seeing one of the locations used in Pirates 2 where Jack Sparrow runs along rope bridges and over gorges to escape the native islanders. Pretty awesome start to the day.

Next was a photo spot opportunity overlooking the town of Roseau and the boats in the harbour. Our guide got us a local delicacy of coconut and spices to try, which was nice, and then we made our way to the botanical gardens. Now, I don’t want to say that they weren’t nice, and that seeing some more of the island wasn’t good, but it was probably the least exciting element of the day. 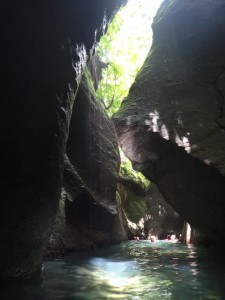 After the gardens, we drove up into the rainforest and stopped a short way from Titou Gorge. This was a famous film location in Pirates 2 as well, but more than that, it is a gorge that you can swim through in the middle of the trees. We climbed into the freezing water (well, Mum climbed, I braved jumping) and swam our way in between the cliff faces. Once we reached the end of the gorge, we got the opportunity to swim in and jump into a waterfall. So awesome.

A small aside: There have been many reported fatalities and injuries at Titou Gorge. As a strong swimmer, I can honestly say a good guide and flotation device is a must, but that the gorge is awesome so long as you take the proper care swimming in confined spaces and cold waters.

Our last stop before heading back to Roseau and the ship was to the stunning natural beauty spot Trafalgar Falls (pictured above). We had to walk 10 minutes into the rain forest to catch a glimpse of the waterfalls flowing from between the trees, but it was definitely worth it. They were beautiful.

I have to say, the island has stolen my heart somewhat. Whether it was the tour or the activities, the island or the peopl, ‘The Nature Isle Explorers’ tour was worth every penny and was the best way to see what we did. I really would like to go back one day to see more of the island, the waterfalls, black beaches, and nature spots, and to scuba dive the amazing reefs. One day…