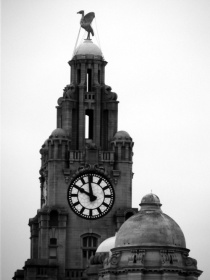 I have been searching the internet for a good travel meme or post collective to get involved in for some time. Y’know, one similar to Top Ten Tuesday, or Top 5 Wednesday, but focusing on travel and not books. I haven’t managed to find something I could get hooked into or take part in, so I decided if it hasn’t been made, make it yourself. And so I have decided to start ‘Friday Favourites’. Each week I plan to mention my favourite things about a particular city, place, country, travel method, tips, etc.

Friday favourites is a fortnightly post featuring travel tips, guides, advice, and thoughts based on my travel experiences!

I decided to start this idea close to home with my home city. I am very lucky that my favourite city is also my home town. I am also very lucky that Liverpool has lots and lots of truly amazing things to do, places to see, restaurants to eat in……it has everything a girl could want. This list isn’t short, but it does feature some of my favourite things about this wonderful city: 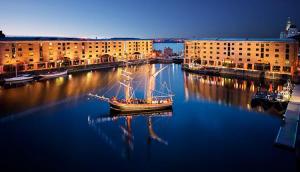 Liverpool is a city spawned from it’s river and docklands, and the Albert Dock is the most famous of them all. The docks were refurbished in the 1980’s, and have become one of the most visited free tourist attractions in the United Kingdom. The Albert docks features a plethora of bars, restaurants, and cafés, and is also home to many independent shops. It is the place to go for Liverpool themed gifts, and is an absolute must for anyone who is a fan of jelly bean art (I won’t ruin the surprise for you.)

In addition to the shops and cafés, the Albert Dock (and surrounding area) also features numerous galleries and museums. Liverpool is home to one of the only Tate Modern galleries which can be found overlooking the river. It is also home to the Beatles Museum and the Slavery museum. Neighbouring the older dock buildings is a purpose built structure housing the new Museum of Liverpool.

And overlooking the whole scene are the three graces, the three buildings that made Liverpool’s waterfront so famous. The Port of Liverpool building, The Cunard Building, and the Liver Building define the recognisable skyline and are a beacon for the international prestige of the city. 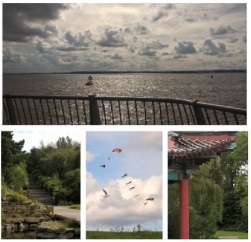 I think, out of every little nook and cranny in the city, Otterspool promenade is my favourite place in the city. The calmness of the river, the kites, the children learning to ride a bike, the café, the view of the river. It is a special, peaceful place.

Alongside the promenade is the recently refurbished garden festival site, It sat derelict for over twenty years, before it was finally renovated into a tranquil Oriental garden, complete with lake and pagoda.

As a red, I am naturally biased in my stadium loyalty. The Liverpool FC museum and stadium tour has become a world renowned attraction, and pilgrimage for many fans. The ground is full of history and atmosphere, and comes alive on matchdays when filled with 45,000 passionate, screaming fans. The highs and lows, the history can be seen and felt inside and outside the ground, and is a must-see for any sports fan, and any LFC nut!

Every city has an area full of quirky shops, artistic centres, and alternative eateries, and Liverpool is no different. Whether you want to eat Lebanese street food at Bakchich or watch a indie film at FACT,

buy vintage clothes, or forgotten books, Bold Street has a plethora of places for any taste, and has survived the modern revamp that has changed the face of the city.

Located a couple of miles outside the city centre, Sefton Park is one of the larger public parks in the city boundaries. It features a beautiful lake, a stunning palm house,

and hosts many of the city’s flagship events such as the food and drink festival, and many a bonfire night firework display. 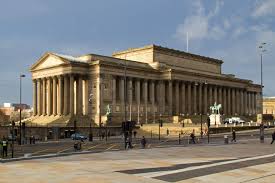 Liverpool’s city centre is filled with fine examples of Georgian and Victorian architecture. There are many fine examples that can be found throughout the city, but the most impressive for me is the trio Neoclassical buildings that were recently inducted into Liverpool’s World Heritage site. St. George’s Hall is the most impressive of the three buildings, and stands in it’s own gardens. The outside Neo-Grecian architecture is almost as impressive as the mosaic floor within consisting over 30,000 Minton files. The Museum of Liverpool embraces the history of the city and the world and incorporates one of the buildings into an interactive experience.

For me, however, the most impressive building is the central library. Outside, it fits right in alongside St. George’s Hall and the museum, but inside, it holds any book lovers dream rooms. Classic books and old fashioned floor to ceiling shelves equal stunning rooms of beauty and knowledge, and make any Beauty and the Beast lovers dreams come true.

Liverpool city centre isn’t the only part of the city that features historic sites. Speke Hall is a National Trust property in the south of the city, and is a Tudor manor house in elegant grounds. The house is an excellent example of wood-framed wattle-and-daub Tudor architecture, and sits in carefully maintained grounds that feature seasonal displays and activities. 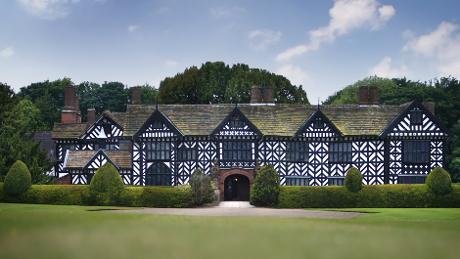 Added tip: there is a lovely walk around the edge of the grounds that overlooks the airport runway. It’s not in keeping with the classic elegance of the property, but watching planes take off and land is always a fun activity.

The best pizza in England, and don’t just take my word for it! Amalia is a small independently run Italian restaurant in the city centre, and produces the best pizzas and calzones I have ever had (and yes, I have been to both Chicago and Italy). OK, so, I missed Thanksgiving, and Christmas dinner, but the calzone al proscuitto was the only food I actually craved while I traveled the world for 11 months.

Breakfast at The Tavern

Anyone who has ever lived in Liverpool, any student who ever called the city home, will have been to The Tavern. The Tex Mex restaurant is a hive of activity, and serves the best Mexican food in the city. And then, one glorious day a couple of years ago, they decided to start serving breakfast. In a city sadly lacking in good breakfasts, the unlimited coffee and award winning breakfasts are a staple in any hungover students, any wild hens, and birthday celebrating locals plans.

If you’re a regular reader of my blog, you will probably know this already, but, if you’re not, I used to live in Thailand. Every day I ate street Thai food, and as soon as I left I missed the unique taste of authentic Thai cuisine, and knew it would be nigh on impossible to find again once I left. Cue Chaba Chaba, a Thai restaurant in Liverpool that professes ”Our food is cooked to an authentic taste.” I can attest that this is indeed true, their Som Tam, Phad Thai, and sweetcorn fritters were straight off the streets of Roi-Et.

Ask anyone from around the world about Liverpool, and they have usually heard of Football or the Beatles. The city may be divided by Red and Blue when it comes to sporting loyalties, but it is united in it’s fierce pride of it’s greatest success stories.

The Beatles are a beacon of the city. The Magical Mystery Tour Bus used to go past my school(s), I lived by Strawberry Fields and now reside near Paul McCartney’s childhood home, the museum is a staple in many tourists plans, but for me, The Cavern is where the magic lies. The pictures that adorn the walls, the music in the bricks, it exudes culture and history, and is still the best place to watch live music in the city.

The Bluecoat Chambers is the oldest surviving building in the city centre of Liverpool. The Liverpool Bluecoat School (my old school no less) moved from the site just over 100 years ago, and it has since been an arts and creativity centre, laying claim to the title of the oldest arts centre in Great Britain.

The courtyard in the Bluecoat Chambers is an oasis within the hustle and bustle, and is an amazing place to grab a few moments of calm, and maybe eat a packed lunch in some tranquil and beautiful surroundings.

This is down as a bonus simply because, as the name suggests, it’s located near Chester and not Liverpool. Chester is less than an hour from the city centre by car or train, and is a great city to visit, however, the zoo is one of the best in the UK. It features mainly amazing exhibits, from Jaguars to Komodo Dragons, red pandas to rhinos, and absolutely everything in between. Perfect for anyone between 1 and 99, it’s a great day out from the city.

Are you from Liverpool, or have you visited recently? What are you favourite things to do? Why don’t you plan your trip to Liverpool soon?

1 thought on “Friday Favourites: 12 Places Everyone Should See in Liverpool”