The last major leg of the trip for Jon and I was to travel to the much hyped, much recommended Kruger National Park. I had shopped round for good rates on a safari to the park, and we had settled on one that had tented accommodation. After the experiences is in Victoria Falls, I wasn’t hugely looking forward to staying in a tent, especially after realising how cold it can get in South Africa at that time of year.

The big 5 is something I would love to see, so this leg of the trip was actually the first bit we sorted! The big 5, for those who don’t know, is rhinos, leopards, lions, buffalo, and elephants.

The drive there (and back) was a hefty journey of approaching 10hrs. It was thankfully broken by a  stop at a lovely restaurant where we ate good food, and got to know a little about the others on our trip.  We arrived at a service station which had rhinos and buffalo through the back, but they didn’t look wild so I decided not to count these.  We were travelling with a couple from San Jose, California, and a family from Grand Rapids, Michigan, and it was nice to be able to put names to faces and have a bit of a chat now as we knew we were going to spend a lot more time with them over the safari days.

When we arrived at the Balule Game reserve, Jon and I were pleasantly surprised to find that the first night would be spent in a nice little lodge, with it’s own bathroom and nice beds. It was hugely welcome after the long drive, and allowed us to prepare our bags,, and ourselves, for the safari tents over the next 2 nights.

On the first evening, we ventured out to the open back safari jeeps and wen ton a night safari. It started out light, and we quickly saw impalas and giraffes (both which would become a normal sight over the coming days) The night quickly fell , as did the temperatures. Before long, we were under blankets and I was tucking my face into my jumper. We didn’t see too much, a few more impalas, and a hyena, before making our way to an evening Braai (South African BBQ). 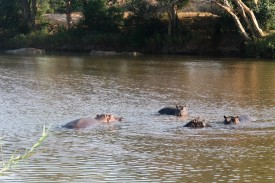 The following morning we were up at the crack of dawn for breakfast. I was quite thankful all the food was included (with exception of within Kruger itself) because it would have been too hard to source food, never mind at 5am! The bush walk was a nice change of pace, but we didn’t see much and did go on a wild goose chase to find some elephants that were allegedly making their way through the area. Once we arrived at the river most of the way through the walk we finally saw something. There was a group of hippos in the water not far from where we were, and we were also able to see crocodiles making their way along the banks just under the water. 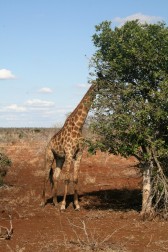 The afternoon was spend making our way round the reserve, but in a van this time. We got comically stuck in the sand at one point, which to be honest was the highlight of the drive. Yes, we saw some animals, but we were still short of lions, elephants, and leopards and were getting a little tired or doing drives in a reserve other than Kruger. That said, getting stuck and having to decamp from the vehicle and lift it out of the mess it was in was hilarious!!

That night we transitioned to Marc’s Treehouse, which was where we were given tented accommodation. It was nothing like the tents in Zimbabwe, or to be fair, tents anywhere as It has solid walls and floor, just a tented canopy roof, which was under a rain protector. The group was talking much more, and we got to know the group from Grand Rapids much better. It was nice to chat to people from the other side of the pond about sports, and politics, and well…everything. They certainly made me more eager to travel and see Cape Town! 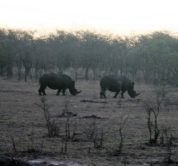 The next morning we were finally off to Kruger itself. While I was a little disappointed that we had not spent more time there, I was just glad to finally be going. It was absolutely freezing in the back of the truck, I as buried under blankets and in my hoodie tightly. The wind burn was fairly brutal, but totally worth it, because we saw some rhinos as soon as we arrived in the park. 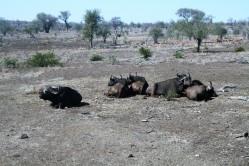 We made it clear to the driver what it was we wanted to see as a priority – basically cats and elephants. He ensured us we would definitely see elephants, and advised he had never done a drive without seeing some lions, so I was pretty hopeful. The big 5 is on my bucket list! We started driving round the park in a seemingly aimless manner, and began seeing lots of different animals, from hyenas to okapi, and impala to buffalo. There were a lot of buffalo in Kruger, which made knocking the second animal from the top 5 off our list relatively easy. 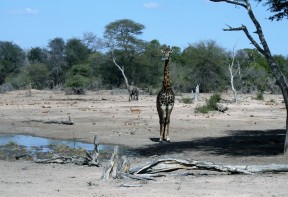 We then had a bit of an animal drought. The driver was on the hunt for cats for us, and while I was appreciative, part of me did just want to see anything rather than nothing. We finally saw an elephant in the distance and some baboons running in the foreground, before stumbling upon a watering hole with some giraffe and elephants. 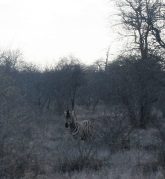 We saw some more hippos in a river, who were sadly going through a death season, and then finally struck gold on a cat. A lioness was basking in the sun not far away from the road, so we stopped for a while and watched her. While we were there a herd of elephants, big and small, passed between the trucks, affording us an excellent view all around. The elephants we saw throughout the day were all fairly unphased by our presence, and we were able to get quite close to them. Well, as close as we felt safe too. 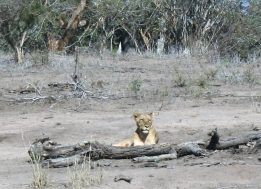 On the return to camp, we managed to see some more rhinos on the edge of the road, which was a nice finish to the day. After the pizza we treated ourselves too at lunch, we were back on South African food int he evening, before an early night to prepare for an early bushwalk. The bush walk itself was our last opportunity to potentially see a leopard, but unfortunately they eluded us!

If you ever fancy doing a safari, I would wholeheartedly recommend Kruger. Yes, the setting wasn’t as picturesque and perfect as the Lion King-esque grasslands in Kenya, but we saw a lot in a small space of time, and had a truly unforgettable experience.