Margaret River is a large wine region South of Perth and is one of the premier wine producing areas of Australia. As one of the main things to do in the region, and to get all 6 of us out of the flat for a couple of days, we set off to complete a wine tour and a quick stop drive down the highlights of the coastline.We all piled into the hired bi car and set off South surrounded by luggage. The boys were going to play golf, so we left them to fend for themselves in the rain while we headed off to Mandurah with Helen. Known for it’s dolphins, we sat and had a hot drink while unsuccessfully looking into the harbour for a sign of any fins. We didn’t see any, but had a nice morning at the harbour before heading back to the golf course to collect them.

Our next stop was Dunsborough, the most major stop we would have before we stopped at our holiday lodge. Here, we stopped in a chain cafe called Dome. Dale started mispronouncing it, and now I can’t see it without hearing it incorrectly in my head now. While there, a stupid bet with Dale and Manny was made that resulted in us leaving with a crate of cider to go the beach. It was cold and rainy, and the sea had large waves, but Dale was determined to win, so swam in the sea.

Our next stop further down the coast was Sugarloaf rock. Helen travelled here in nicer weather, but it was stil impressive. Dale, Manny, Jade, and I decided to venture out onto the rock, which meant climbing further out into the wind and rain. It was definitely worth it though!

We finally set about finding the house, buried deep in the bushy outskirts of the Margaret Rover area. When we arrived I certainly wasn’t sure we were actually in the right place as it was seriously upmarket. It had 4 bedrooms, huge bathrooms, 4 balconies; it was just huge and luxurious. The boys graciously agreed to share so Jade and I could have separate bedrooms; the first time this has happened since we left England.

Once we had cleaned up and got ready, we headed to the town of Margaret River and decided to try the Mexican restaurant there. the food was really nice, especially the nachos. We had a glass of wine with dinner, and enjoyed a nice night together. Thanks Dale! When we returned, Jade, Dale, Manny, and I played charades into the early hours.

The next morning we were all up and ready to go in time to walk up to the gated entry to our lodge area. We wandered around the other lodges on our way before waiting for ages for the bus that would take us on the actual tour of the wineries. I think the other people on the tour were surprised that we were at that pick-up location.

The first winery we went to was House of Cards, and it turned out to be my favourite after the day was done. I quickly discovered that the white wine was not for me and that it all tasted of vinegar, and that although the rose was drinkable it wasn’t as nice as the reds. We all liked it there and decided to return the next day to buy and wine we wanted to. 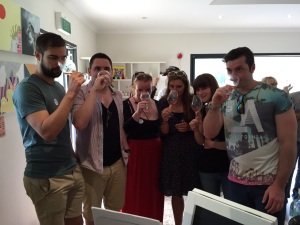 After House of Cards, we headed a short way to Wills Domain. Here the wines weren’t nearly as nice,but the setting was really beautiful. We also noticed the comical old ladies here first who scooped up any left over wine and tapped up other barmen for more tries. After here, we went to a seemingly out of place soap store called Virgin Vasse which provided the moment on the tour when one of the old ladies ate the soap by mistake. The food and dips here were so good that the guys bought some to take home for our BBQ tea.

Lunch was at a picturesque winery called Knotting Hill. It consisted of more wine that Dale decided to buy to go with our food that we probably didn’t need, and lots of strange foods, including kangaroo and crocodile – both of which were really nice. The winery also stocked some of the best Rose we tried all day, which was so good that our group ended up buying 3 bottles. Not much in comparison to the others who were buying 12 bottles a go.

After lunch saw us travel to Woody Nook and the Margaret River chocolate company. The chocolate store was giving away free samples and we completed Helen’s birthday present! Woody Nook was a small winery with an eccentric lady running the wine tasting. They did feature my favourite wine however, that just happened the be the most expensive bottle we had tried all day. Oh well.

Our final stop before returning was a brewery called Cheeky, that also had a small winery attached. The lads went off the pay for beer samples, while we continued in the vain of free tries and stayed on the wine. The lads also managed to sort out a lift to the shop while we went home to get supplies in for the BBQ we planned to have when we got back. As we sat round, Dale and Manny thought they heard something being killed which ended up in an hour long determined search for any evidence of what happened. Nothing ever showed up.

The food was great, and after the success of charades on the first night, we all played again while we waited for our food to settle. Jade and I made full use of the baths in our bathrooms (well the small spa jet pools would be a better description) nd read some of our books in luxury.

The next morning, we were all up early for the drive south to Bunker Bay, Hamelin bay, and to the lighthouse that marks where the Southern and Indian Oceans meet. Hamelin bay is home to large rays that swim in and eat off the fishing boats that are launching in the early morning. There weren’t as many as Helen had hoped but we repeatedly saw one floating round near the bot ramp, it was pretty cool. We all stopped at a picturesque beach at Bunker bay that allowed us to do our sand writing for Perth and see some more WA coastline.

A slightly impromptu stop saw us pull into a cave system car park, and for us to embark on a tour of Jewel Cave. The cave system was impressive, and big enough to fit the lighthouse we would later see inside. There were lots of different rock formations inside and different skeletons in the more dark and dingy areas of the cave, it was pretty awesome.

Once we got to the lighthouse, we were all given a headset that told us all about the history of the area. I enjoyed seeing where the oceans met, and seeing something a little different on the trip. We even met the parents of a Lancaster Student who we had gone to uni with, small world! We had lunch at the ocean front, and all stepped into the water. I wasn’t sure I’d ever get to stand in the Southern Ocean!

To break the long drive home, we stopped at Bussleton Jetty, the longest jetty in the Southern hemisphere. It was rainy and cold, but one of the lads had a big idea to walk down it anyway, even in the wet and wind. It was a fair way, and I was freezing, but it did result in one of my favourite photos from our trip so far.

Margaret River was a really nice, and luxurious, break that felt like a holiday more than just travelling.