Kuala Lumpur has been my favourite place to visit so far. Between the Formula 1, the foodie experience,  the Batu Caves, The Petronas Towers, the shopping malls, and the people, it has definitely, without a doubt, eclipsed everywhere we have been so far. Maybe it’s because we spent a little longer there, maybe it’s just because we went to the Grand Prix, but it was an amazing city.

*I am writing a separate post for the Grand Prix – a paragraph or 3 here would not do it justice.

When we arrived in Kuala Lumpur, I could have been anywhere; I was just pleased to be off the bus. We were dropped in a bus station that we knew was walking distance from our hostel, so after a quick lunch, we headed out past the disbelieving taxi drivers in search of our hostel. We got there pretty easily, even with our luggage, and once we were there, we were glad we had opted for the cheap option in the good location. After depositing our bags, sorting our documents for AYC, and ensuring everything for the Formula 1 was set and ready, we headed to NU Sentral mall, one of many supersized shopping malls in KL, we went to buy the bits we needed for  the race days that we didn’t have, and going forward from Asia. 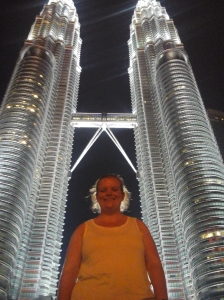 We also went on a hunt to find the Petronas towers. We knew we were at the right station, but were lost in a mall (surprise surprise). When we finally found an exit, we were very surprised to find that we couldn’t see the towers. That’s because we had been underneath them the whole time. We checked to see if we could go tot he skybridge while we were there, but the foodie experience we were booked on clashed, so we opted for post race day on Sunday. It would be a tight squeeze on either day, but the odds were better on the Sunday.

The foodie experience was a surprisingly good evening out with new people, despite how ill I felt going into it. We were shown different types of traditional Malaysian food; Malay, Chinese, and Indian. The food was really good throughout, especially at the curry stop, and we got to see areas of KL that we wouldn’t have visited otherwise, such as Little India. The woman who led the tour was really nice and enthusiastic. It was a nice thing to have included in our travel pass and something we would have definitely missed had we had to pay separately.

The next 3 days were occupied by early starts, fast cars, and thunderstorm watches. It was an unbelievable experience at the Sepang Circuit and something awesome that I can now say I have done. Watching the Formula 1 was very different there to on the TV, a good different I think. So much happened that I will try to fill you in within my next post, I promise.

On the Sunday, we left the race track as the race finished, and just made it onto a bus to the Petronas Towers. Traffic was obviously bad, and we were worried that we wouldn’t make it for our time slot to go up to the skybridge. Thankfully, we made it with an awful lot of time to spare, and we able to go and buy food, and get changed into clean clothes. When we went for food, a young Malaysian guy stopped and asked about our curious tan/burn marks, and ended up sitting and talking to us for ten minutes. He was nice enough, and had lived in Derby for a while, so it was quite nice talking to him.

The Petronas towers were really cool. We were in a small group with people and were taken in a rapid moving lift to the skybridge, about a third of the way up  the towers. The bridge is fairly unique, and connects the two towers, so despite the glare and the rain on the windows, it was an awesome thing to do. I wish more of the photos had come out. We also got to go to the observation deck near the top, which I didn’t realise we would get to do. The view again was insane, and you could also see the top of the other tower, which you couldn’t do from the bridge. Definitely one of the cooler things we did.

The following day saw us embark on a train journey to the Batu caves just outside of Kuala Lumpur city. The Hindu temple complex is literally built into the walls and cave system at the site, and is a really strange place to visit. There were also monkeys, lots of them, everywhere, which was surprising. It looked really good on the internet, and was pretty cool in real life, but I’m not sure it was completely what I was expecting. I’m pleased we went though, because it is a pretty unique place to visit. We also nailed our shopping there, which was a double bonus.

Kuala Lumpur was amazing, and the best possible end to an amazing time in Malaysia. I have fallen in love with the country, I wish we had more time to explore! Onwards to Singapore!