This week has seen a return to the bare white walls we didn’t like so much when we first moved in. there is nothing wrong with bare walls, or white walls, but they just felt so sterile. I had grown accustom to the pictures, student’s work, and Christmas decorations that adorned the walls all over the house. It’s a shame they have had to come down, but we’re getting that much closer to leaving that ir’s not that bad. I can live with it.

We have both packed boxes to send home with stuff to make our bags lighter for the onward travelling. Jade sent hers this week, and although it cost a lot, the box was fairly big. We’ve put souvenirs and keepsakes, clothes and cards, absolutely all sorts to make sure we have maximum room and minimum weight possible in our bags. We’ll see if it all pays off when we actually get to Bangkok.

I have told my school this week that I am leaving at the end of the term, it’s really not been easy to do. I don’t want to go in some ways, I’ve really grown to love the job and the people here, but I don’t love it enough to put off my travelling and stay. I feel better now as I have told them, but their reactions were heartbreaking. It feels better to know that they won’t be left in the lurch and have long enough to ask AYC for a new teacher, but it still sucks. They don’t have teachers stay at the school, which is hard to believe considering how friendly and accommodating they have been.

I have been looking into future careers for weeks now, well months really. I am pretty settled that I will apply to become a teacher in the fall, but I am not 100% this is all I will apply for. I have toyed with looking into becoming a pilot on and off throughout my university education. I’ve never really discussed it with anyone because I didn’t know enough about it, and most people think you’re taking the mick when you say you want to become one. I know it can cost a lot, so I think I had always ruled it out on that basis.

In the past couple of weeks I have seriously looked into sponsorship programmes, and ways into becoming a pilot that don’t leave you feeling financially screwed. there aren’t many, but they are definitely going to be worth applying for if I decide it is something I want to pursue. Between PGCE applications and pilot sponsorships, I hopefully will get something that I want to pursue. If not, I’ll just have to do this again somewhere else. 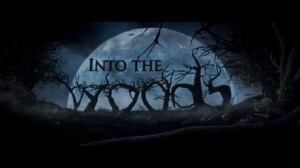 This weekend we completely bailed out of our major plans to see the Buddha and complete some tasks around the house, and opted for an impromptu Big C and cinema trip. We checked out the showtimes and discovered Into the Woods was showing in English, so we decided we’d just do it and go and see it. Jade didn’t know it was a musical, I didn’t know it was a Disney film, and neither of us knew James Corden was the lead character or that a kids film could have so many blatant innuendos! I didn’t like the bit with Johnny Depp, at all, it reminded me of  the Child catcher way too much. I had to close my eyes and wait until he had left the screen. Only a tiny bit embarrassing. Whilst watching, I couldn’t believe how many times the name of the film was mentioned in the songs. It must have been over 200 times (I’d love to say that was an exaggeration, but it’s really not). Were they worried that you wouldn’t remember the name when you left?

I am shifting through Paige Toon’s books, they’re so easy to read. I am not sure they are of any sort of decent quality, and they are pretty predictable, but they are a good distraction to unwind after work. I’ve read a lot of this stuff since I have been here. I really wanted to read better quality books, but I just haven’t brought myself to do it yet this year at least. I’m a little disappointed but I know that reading stuff after work is meant to be a distraction and not a chore, so I guess until I leave, whatever I want to read is better than not reading at all, right?

I got sent home two days this week. Not sent home because of poor performance, or because I was ill, but because I wasn’t needed to teach. It was lovely to have some time in the day to myself not at school to do, well, absolutely nothing, if I am honest. Exam week requires absolutely no assistance from me, so the time off was appreciated.

This weekend we have big plans to go to Chiang Mai to claim the free Flight of the Gibbon experience we were offered when our Bangkok trip didn’t run smoothly. We literally can’t wait, even if it means two over night bus journeys in two days. Our visa situation is still up in the air, which is very annoying after this weeks painful salary news especially, so we could also be facing another stressful and eventful visa run. 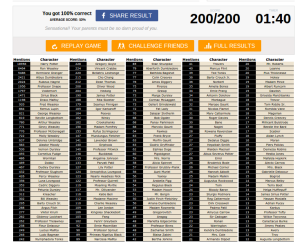 In other news, I have rediscovered Sporcle with a vengence to fill my endless hours of boredom. I have finally completed one of the three challenges I have so eagerly been attempting to finish this weekend: The Harry Potter Top 200. I still need to complete the countries of the world (I am making decent progress) and the Harry Potter chapters challenge (which I am doing well at, but Jade has now completed – extra incentive.)

We shall see. I hope everyone had a good weekend, especially my brothers – happy birthday.